What is Artificial Neural Network?

If you take a look at the figure above, you will understand the underlying mechanism.

The program takes some input values and pushes them into two fully connected layers. Imagine you have a math problem, the first thing you do is to read the corresponding chapter to solve the problem. You apply your new knowledge to solve the problem. There is a high chance you will not score very well. It is the same for a network. The first time it sees the data and makes a prediction, it will not match perfectly with the actual data.

To improve its knowledge, the network uses an optimizer. In our analogy, an optimizer can be thought of as rereading the chapter. You gain new insights/lesson by reading again. Similarly, the network uses the optimizer, updates its knowledge, and tests its new knowledge to check how much it still needs to learn. The program will repeat this step until it makes the lowest error possible.

In our math problem analogy, it means you read the textbook chapter many times until you thoroughly understand the course content. Even after reading multiple times, if you keep making an error, it means you reached the knowledge capacity with the current material. You need to use different textbook or test different method to improve your score. For a neural network, it is the same process. If the error is far from 100%, but the curve is flat, it means with the current architecture; it cannot learn anything else. The network has to be better optimized to improve the knowledge.

In this Artificial Neural Network tutorial, you will learn:

A layer is where all the learning takes place. Inside a layer, there are an infinite amount of weights (neurons). A typical neural network is often processed by densely connected layers (also called fully connected layers). It means all the inputs are connected to the output.

A typical neural network takes a vector of input and a scalar that contains the labels. The most comfortable set up is a binary classification with only two classes: 0 and 1.

The network takes an input, sends it to all connected nodes and computes the signal with an activation function.

The figure above plots this idea. The first layer is the input values for the second layer, called the hidden layer, receives the weighted input from the previous layer 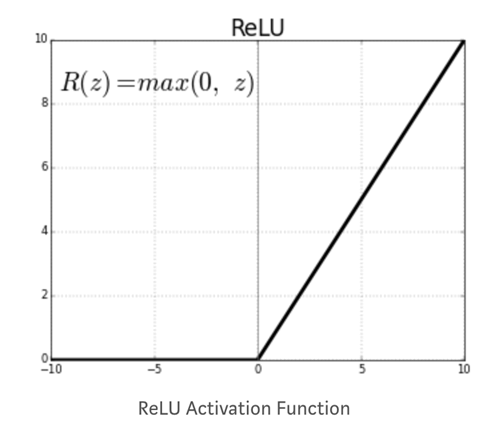 The other activation functions are:

The critical decision to make when building a neural network is:

Neural network with lots of layers and hidden units can learn a complex representation of the data, but it makes the network’s computation very expensive.

After you have defined the hidden layers and the activation function, you need to specify the loss function and the optimizer.

For binary classification, it is common practice to use a binary cross entropy loss function. In the linear regression, you use the mean square error.

The loss function is an important metric to estimate the performance of the optimizer. During the training, this metric will be minimized. You need to select this quantity carefully depending on the type of problem you are dealing with.

The loss function is a measure of the model’s performance. The optimizer will help improve the weights of the network in order to decrease the loss. There are different optimizers available, but the most common one is the Stochastic Gradient Descent.

The conventional optimizers are:

Following are the limitations of Neural Network:

A common problem with the complex neural net is the difficulties in generalizing unseen data. A neural network with lots of weights can identify specific details in the train set very well but often leads to overfitting. If the data are unbalanced within groups (i.e., not enough data available in some groups), the network will learn very well during the training but will not have the ability to generalize such pattern to never-seen-before data.

There is a trade-off in machine learning between optimization and generalization.

Optimize a model requires to find the best parameters that minimize the loss of the training set.

Generalization, however, tells how the model behaves for unseen data.

To prevent the model from capturing specific details or unwanted patterns of the training data, you can use different techniques. The best method is to have a balanced dataset with sufficient amount of data. The art of reducing overfitting is called regularization. Let’s review some conventional techniques.

A neural network with too many layers and hidden units are known to be highly sophisticated. A straightforward way to reduce the complexity of the model is to reduce its size. There is no best practice to define the number of layers. You need to start with a small amount of layer and increases its size until you find the model overfit.

L1: Lasso: Cost is proportional to the absolute value of the weight coefficients

L2: Ridge: Cost is proportional to the square of the value of the weight coefficients

Dropout is an odd but useful technique. A network with dropout means that some weights will be randomly set to zero. Imagine you have an array of weights [0.1, 1.7, 0.7, -0.9]. If the neural network has a dropout, it will become [0.1, 0, 0, -0.9] with randomly distributed 0. The parameter that controls the dropout is the dropout rate. The rate defines how many weights to be set to zeroes. Having a rate between 0.2 and 0.5 is common.

Example of Neural Network in TensorFlow

Let’s see an Artificial Neural Network example in action on how a neural network works for a typical classification problem. There are two inputs, x1 and x2 with a random value. The output is a binary class. The objective is to classify the label based on the two features. To carry out this task, the neural network architecture is defined as following:

The network will optimize the weight during 180 epochs with a batch size of 10. In the ANN example video below, you can see how the weights evolve over and how the network improves the classification mapping.

First of all, the network assigns random values to all the weights. 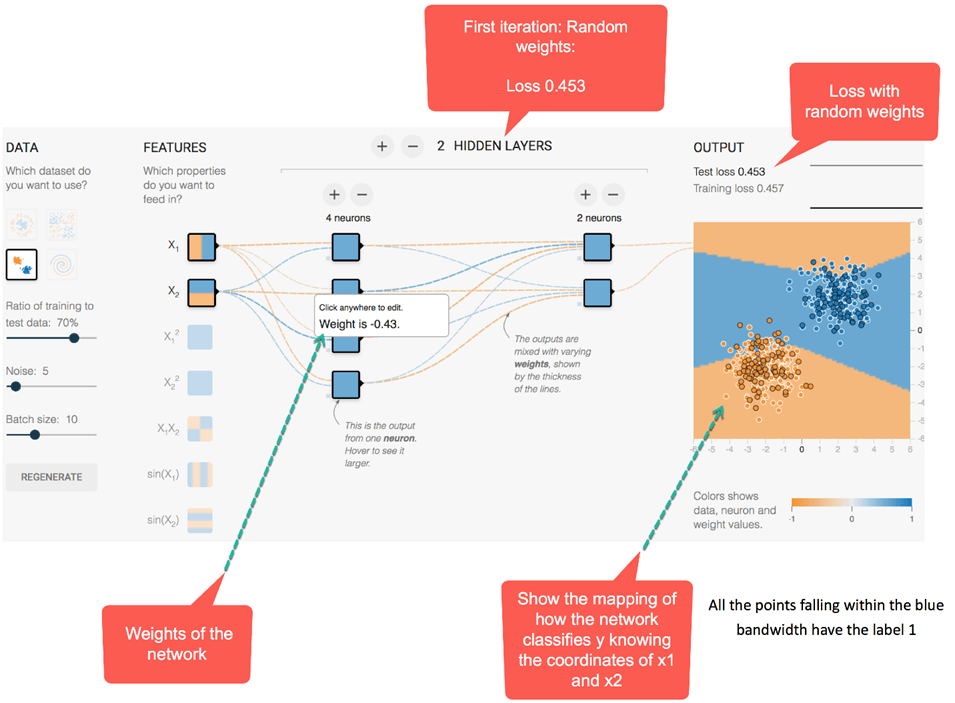 Inside the second hidden layer, the lines are colored following the sign of the weights. The orange lines assign negative weights and the blue one a positive weights

As you can see, in the output mapping, the network is making quite a lot of mistake. Let’s see how the network behaves after optimization.

The picture of ANN example below depicts the results of the optimized network. First of all, you notice the network has successfully learned how to classify the data point. You can see from the picture before; the initial weight was -0.43 while after optimization it results in a weight of -0.95. 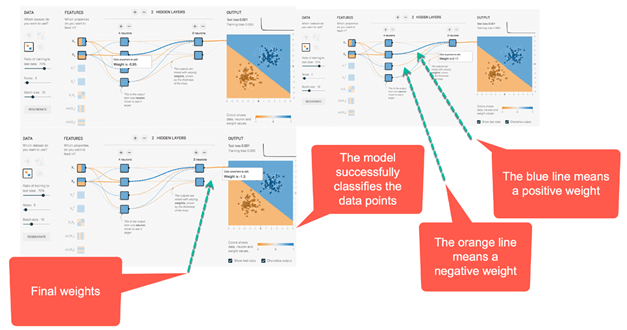 The idea can be generalized for networks with more hidden layers and neurons. You can play around in the link.

How to Train a Neural Network with TensorFlow

Here is the step by step process on how to train a neural network with TensorFlow ANN using the API’s estimator DNNClassifier.

We will use the MNIST dataset to train your first neural network. Training a neural network with TensorFlow is not very complicated. The preprocessing step looks precisely the same as in the previous tutorials. You will proceed as follow:

First of all, you need to import the necessary library. You can import the MNIST dataset using scikit learn as shown in the TensorFlow Neural Network example below.

The MNIST dataset is the commonly used dataset to test new techniques or algorithms. This dataset is a collection of 28×28 pixel image with a handwritten digit from 0 to 9. Currently, the lowest error on the test is 0.27 percent with a committee of 7 convolutional neural networks.

You can download scikit learn temporarily at this address. Copy and paste the dataset in a convenient folder. To import the data to python, you can use fetch_mldata from scikit learn. Paste the file path inside fetch_mldata to fetch the data.

After that, you import the data and get the shape of both datasets.

Scikit learns has already a function for that: MinMaxScaler()

You are now familiar with the way to create tensor in Tensorflow. You can convert the train set to a numeric column.

The architecture of the neural network contains 2 hidden layers with 300 units for the first layer and 100 units for the second one. We use these value based on our own experience. You can tune theses values and see how it affects the accuracy of the network.

To build the model, you use the estimator DNNClassifier. You can add the number of layers to the feature_columns arguments. You need to set the number of classes to 10 as there are ten classes in the training set. You are already familiar with the syntax of the estimator object. The arguments features columns, number of classes and model_dir are precisely the same as in the previous tutorial. The new argument hidden_unit controls for the number of layers and how many nodes to connect to the neural network. In the code below, there are two hidden layers with a first one connecting 300 nodes and the second one with 100 nodes.

To build the estimator, use tf.estimator.DNNClassifier with the following parameters:

Step 5) Train and evaluate the model

The current architecture leads to an accuracy on the the evaluation set of 96 percent.

You can try to improve the model by adding regularization parameters.

We will use an Adam optimizer with a dropout rate of 0.3, L1 of X and L2 of y. In TensorFlow Neural Network, you can control the optimizer using the object train following by the name of the optimizer. TensorFlow is a built-in API for the Proximal AdaGrad optimizer.

To add regularization to the deep neural network, you can use tf.train.ProximalAdagradOptimizer with the following parameter

The values chosen to reduce the over fitting did not improve the model accuracy. Your first model had an accuracy of 96% while the model with L2 regularizer has an accuracy of 95%. You can try with different values and see how it impacts the accuracy.

In TensorFlow ANN, you can train a neural network for classification problem with:

The estimator requires to specify:

You can improve the model by using different optimizers. In this tutorial, you learned how to use Adam Grad optimizer with a learning rate and add a control to prevent overfitting.