What is Software Testing Technique?

Boundary value analysis is based on testing at the boundaries between partitions. It includes maximum, minimum, inside or outside boundaries, typical values and error values.

It is generally seen that a large number of errors occur at the boundaries of the defined input values rather than the center. It is also known as BVA and gives a selection of test cases which exercise bounding values.

This black box testing technique complements equivalence partitioning. This software testing technique base on the principle that, if a system works well for these particular values then it will work perfectly well for all values which comes between the two boundary values.

Equivalent Class Partitioning allows you to divide set of test condition into a partition which should be considered the same. This software testing method divides the input domain of a program into classes of data from which test cases should be designed.

The concept behind this Test Case Design Technique is that test case of a representative value of each class is equal to a test of any other value of the same class. It allows you to Identify valid as well as invalid equivalence classes.

Input conditions are valid between

Hence there are five equivalence classes

You select values from each class, i.e.,

A decision table is also known as to Cause-Effect table. This software testing technique is used for functions which respond to a combination of inputs or events. For example, a submit button should be enabled if the user has entered all required fields.

The first task is to identify functionalities where the output depends on a combination of inputs. If there are large input set of combinations, then divide it into smaller subsets which are helpful for managing a decision table.

For every function, you need to create a table and list down all types of combinations of inputs and its respective outputs. This helps to identify a condition that is overlooked by the tester.

Following are steps to create a decision table:

Example: A submit button in a contact form is enabled only when all the inputs are entered by the end user.

In State Transition technique changes in input conditions change the state of the Application Under Test (AUT). This testing technique allows the tester to test the behavior of an AUT. The tester can perform this action by entering various input conditions in a sequence. In State transition technique, the testing team provides positive as well as negative input test values for evaluating the system behavior. 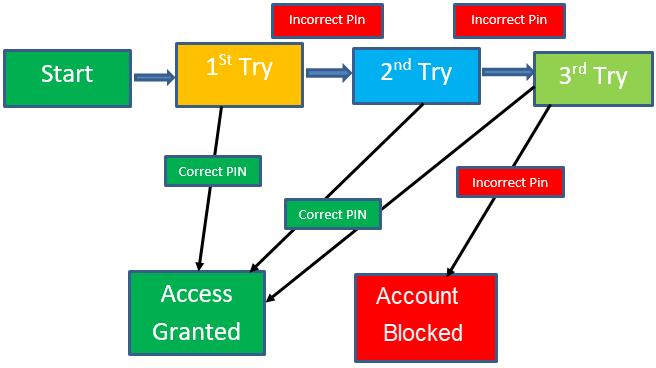 In this diagram when the user gives the correct PIN number, he or she is moved to Access granted state. Following Table is created based on the diagram above-

In the above-given table when the user enters the correct PIN, the state is transitioned to Access granted. And if the user enters an incorrect password, he or she is moved to next state. If he does the same 3rd time, he will reach the account blocked state.

The technique counts a list of possible errors or error-prone situations. Then tester writes a test case to expose those errors. To design test cases based on this software testing technique, the analyst can use the past experiences to identify the conditions.