Analysis of Variance (ANOVA) is a statistical technique, commonly used to studying differences between two or more group means. ANOVA test is centred on the different sources of variation in a typical variable. ANOVA in R primarily provides evidence of the existence of the mean equality between the groups. This statistical method is an extension of the t-test. It is used in a situation where the factor variable has more than one group.

In this tutorial, we will learn

There are many situations where you need to compare the mean between multiple groups. For instance, the marketing department wants to know if three teams have the same sales performance.

The ANOVA test can tell if the three groups have similar performances.

To clarify if the data comes from the same population, you can perform a one-way analysis of variance (one-way ANOVA hereafter). This test, like any other statistical tests, gives evidence whether the H0 hypothesis can be accepted or rejected.

In other words, the H0 hypothesis implies that there is not enough evidence to prove the mean of the group (factor) are different from another.

This test is similar to the t-test, although ANOVA test is recommended in situation with more than 2 groups. Except that, the t-test and ANOVA provide similar results.

We assume that each factor is randomly sampled, independent and comes from a normally distributed population with unknown but equal variances.

The F-statistic is used to test if the data are from significantly different populations, i.e., different sample means.

The left graph shows very little variation between the three group, and it is very likely that the three means tends to the overall mean (i.e., mean for the three groups).

The right graph plots three distributions far apart, and none of them overlap. There is a high chance the difference between the total mean and the groups mean will be large. 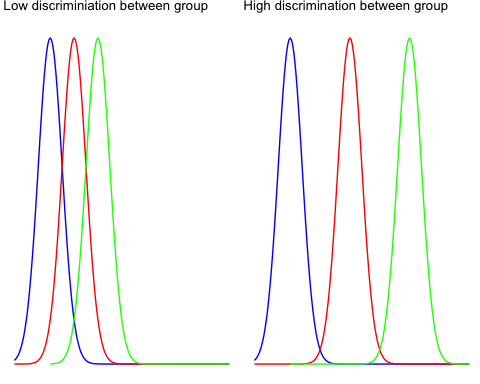 To understand visually the concept of within group variability, look at the graph below.

The left part plots the distribution of three different groups. You increased the spread of each sample and it is clear the individual variance is large. The F-test will decrease, meaning you tend to accept the null hypothesis

The right part shows exactly the same samples (identical mean) but with lower variability. It leads to an increase of the F-test and tends in favor of the alternative hypothesis. 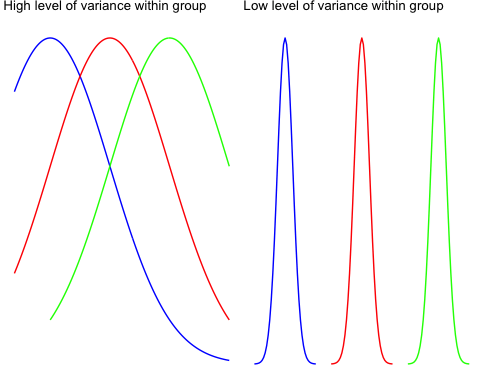 You can use both measures to construct the F-statistics. It is very intuitive to understand the F-statistic. If the numerator increases, it means the between-group variability is high, and it is likely the groups in the sample are drawn from completely different distributions.

In other words, a low F-statistic indicates little or no significant difference between the group’s average.

You will use the poison dataset to implement the one-way ANOVA test. The dataset contains 48 rows and 3 variables:

Before you start to compute the ANOVA test, you need to prepare the data as follow:

Our objective is to test the following assumption:

In other words, you want to know if there is a statistical difference between the mean of the survival time according to the type of poison given to the Guinea pig.

Step 1) You can check the level of the poison with the following code. You should see three character values because you convert them in factor with the mutate verb.

Step 2) You compute the mean and standard deviation.

Step 3) In step three, you can graphically check if there is a difference between the distribution. Note that you include the jittered dot. 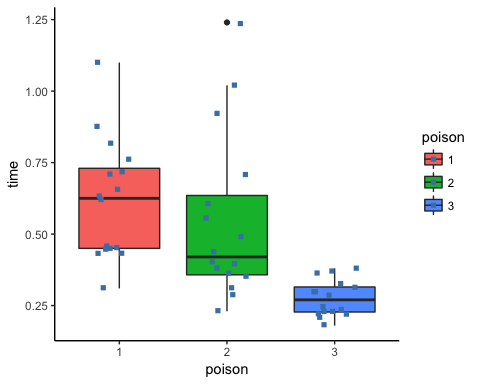 Step 4) You can run the one-way ANOVA test with the command aov. The basic syntax for an ANOVA test is:

The syntax of the formula is:

You can answer our question: Is there any difference in the survival time between the Guinea pig, knowing the type of poison given.

Note that, it is advised to store the model and use the function summary() to get a better print of the results.

The p-value is lower than the usual threshold of 0.05. You are confident to say there is a statistical difference between the groups, indicated by the “*”.

The one-way ANOVA test does not inform which group has a different mean. Instead, you can perform a Tukey test with the function TukeyHSD().

with is a quantitative variable and and are categorical variables.

We adjust our code by adding treat with the other independent variable.

You can conclude that both poison and treat are statistically different from 0. You can reject the NULL hypothesis and confirm that changing the treatment or the poison impact the time of survival.

We can summarize the test in the table below: