What is Package in Oracle?

PL/SQL package is a logical grouping of a related subprogram (procedure/function) into a single element. A Package is compiled and stored as a database object that can be used later.

Package specification consists of a declaration of all the public variables, cursors, objects, procedures, functions, and exception.

Below are few characteristics of the Package specification.

The above syntax shows the creation of package specification.

Below are characteristics of a package body.

Now we are going to see how to refer package elements in the program.

All the public elements of the package can be referred by calling the package name followed by the element name separated by period i.e. ‘<package_name>.<element_name>’.

The public variable of the package can also be used in the same way to assign and fetch values from them i.e. ‘<package_name>.<variable_name>’.

In PL/SQL whenever a package is referred/called in a session a new instance will be created for that package.

Oracle provides a facility to initialize package elements or to perform any activity at the time of this instance creation through ‘Package Initialization’.

This is nothing but an execution block that is written in the package body after defining all the package elements. This block will be executed whenever a package is referred for the first time in the session.

Forward declaration/reference in the package is nothing but declaring the private elements separately and defining it in the later part of the package body.

Forward declaration is an option provided by Oracle, it is not mandatory and using and not using is up to programmer’s requirement.

The above syntax shows forward declaration. The private elements are declared separately in the forward part of the package, and they have been defined in the later part.

Unlike other Elements one needs to be careful in using cursors inside the package.

If the cursor is defined in the package specification or in global part of the package body, then the cursor once opened will persist till the end of the session.

So one should always use the cursor attributes ‘%ISOPEN’ to verify the state of the cursor before referring it.

This is useful when many subprograms needs to do the same task, but the way of calling each of them should be different. In this case, the subprogram name will be kept same for all and the parameters will be changed as per calling statement.

Example 1: In this example, we are going to create a package to get and set the values of employee’s information in ’emp’ table. The get_record function will return the record type output for the given employee number, and set_record procedure will insert the record type record into the emp table.

Step 2) Package contains Package body, where all procedures and functions actual definition will be defined. In this step, Package Body is created. 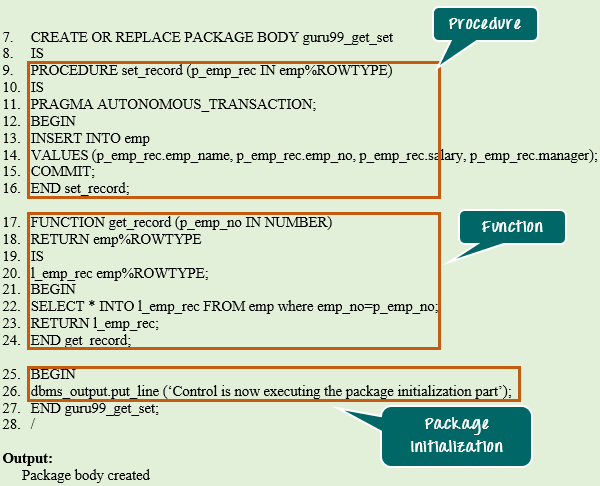 Step 3) Creating an anonymous block to insert and display the records by referring to the above created package. 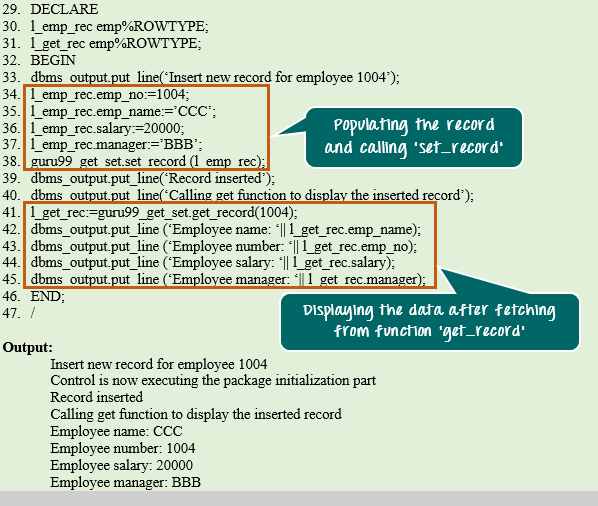 Since the package is the logical grouping of related things, it has some dependencies. Following are the dependency that is to be taken care.

Below table gives the data definition table and the package information that is available in the table.

UTL File is the separate utility package provided by Oracle to perform special tasks. This is mainly used for reading and write the operating system files from PL/SQL packages or subprograms. It got the separate functions to put the information and to get the information from files. It also allows to read/write in the native character set.

The Programmer can use this to write operating system files of any type and the file will be written directly to the database server. The name and directory path will be mentioned at the time writing.

We have now learned the packages in PL/SQL, and you should be now able to work in the following.