In this tutorial, we will learn-

What is a Pipe in Linux?

Pipes help you mash-up two or more commands at the same time and run them consecutively. You can use powerful commands which can perform complex tasks in a jiffy.

Let us understand this with an example.

When you use ‘cat’ command to view a file which spans multiple pages, the prompt quickly jumps to the last page of the file, and you do not see the content in the middle.

To avoid this, you can pipe the output of the ‘cat’ command to ‘less’ which will show you only one scroll length of content at a time.

An illustration would make it clear. 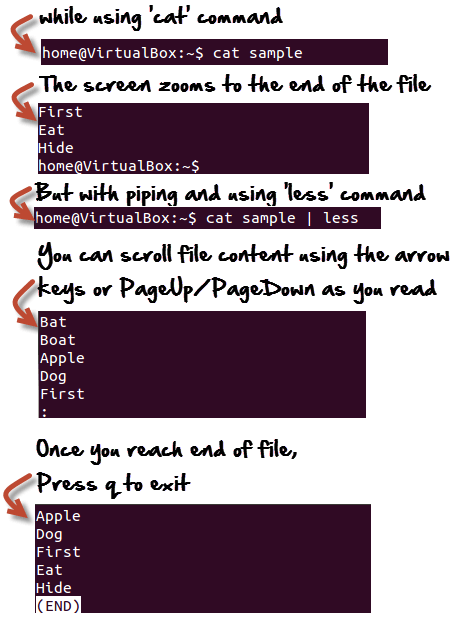 Instead of ‘less’, you can also use.

And, you can view the file in digestible bits and scroll down by simply hitting the enter key.

Suppose you want to search a particular information the postal code from a text file.

You may manually skim the content yourself to trace the information. A better option is to use the grep command. It will scan the document for the desired information and present the result in a format you want.

Let’s see it in action – 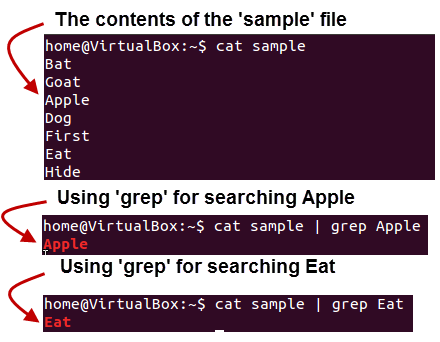 Here, grep command has searched the file ‘sample’, for the string ‘Apple’ and ‘Eat’.

Following options can be used with this command.

Using the ‘i’ option grep has filtered the string ‘a’ (case-insensitive) from the all the lines.

This command helps in sorting out the contents of a file alphabetically.

The syntax for this command is:

Consider the contents of a file.

There are extensions to this command as well, and they are listed below.

The example below shows reverse sorting of the contents in file ‘abc’.

What is a Filter?

Linux has a lot of filter commands like awk, grep, sed, spell, and wc. A filter takes input from one command, does some processing, and gives output.

When you pipe two commands, the “filtered ” output of the first command is given to the next. 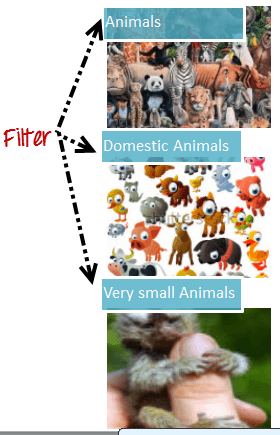 Let’s understand this with the help of an example.

We have the following file ‘sample’

We want to highlight only the lines that do not contain the character ‘a’, but the result should be in reverse order.

For this, the following syntax can be used.

Let us look at the result.