A string in literal terms is a series of characters. Hey, did you say characters, isn’t it a primitive data type in Java. Yes, so in technical terms, the basic Java String is basically an array of characters.

One of the primary functions of modern computer science, is processing human language.

Similarly to how numbers are important to math, language symbols are important to meaning and decision making. Although it may not be visible to computer users, computers process language in the background as precisely and accurately as a calculator. Help dialogs provide instructions. Menus provide choices. And data displays show statuses, errors, and real-time changes to the language.

As a Java programmer, one of your main tools for storing and processing language is going to be the String class.

Now, let’s get to some syntax,after all, we need to write this in Java code isn’t it.

String is an array of characters, represented as:

In technical terms, the String is defined as follows in the above example-

Now we always cannot write our strings as arrays; hence we can define the String in Java as follows:

Concatenation is joining of two or more strings.

Have a look at the below picture-

If we add up these two strings, we should have a result as str3= “RockStar”.

Check the below code snippet,and it explains the two methods to perform string concatenation.

First is using “concat” method of String class and second is using arithmetic “+” operator. Both results in the same output 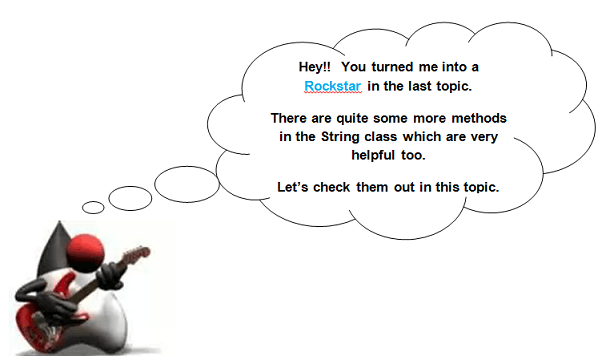 Let’s ask the Java String class a few questions and see if it can answer them:

How will you determine the length of given String? I have provided a method called as “length”. Use it against the String you need to find the length.

If I know the length, how would I find which character is in which position? In short, how will I find the index of a character?

You answered yourself, buddy, there is an “indexOf” method that will help you determine the location of a specific character that you specify.

Similar to the above question, given the index, how do I know the character at that location?

Simple one again!! Use the “charAt” method and provide the index whose character you need to find.

Do I want to check if the String that was generated by some method is equal to something that I want to verify with? How do I compare two Strings?

Use the method “compareTo” and specify the String that you would like to compare.

Use “compareToIgnoreCase” in case you don’t want the result to be case sensitive.

I partially know what the string should have contained, how do I confirm if the String contains a sequence of characters I specify?

Use the method “contains” and specify the characters you need to check.

Returns true if and only if this string contains the specified sequence of char values.

How do I confirm if a String ends with a particular suffix? Again you answered it. Use the “endsWith” method and specify the suffix in the arguments.

I want to modify my String at several places and replace several parts of the String?

Java String Replace, replaceAll and replaceFirst methods. You can specify the part of the String you want to replace and the replacement String in the arguments.

I want my entire String to be shown in lower case or Uppercase?

Just use the “toLowercase()” or “ToUpperCase()” methods against the Strings that need to be converted.

then “hello” String does not get deleted. It just loses its handle.

then only one pool for String “hello” is created in the memory with 3 references-h1,h2,h3

then it will print: The number is:579

That’s all to Strings!