Inheritance is a mechanism in which one class acquires the property of another class. For example, a child inherits the traits of his/her parents. With inheritance, we can reuse the fields and methods of the existing class. Hence, inheritance facilitates Reusability and is an important concept of OOPs.

Here are the different types of inheritance in Java:

In Single Inheritance one class extends another class (one class only).

In above diagram, Class B extends only Class A. Class A is a super class and Class B is a Sub-class.

As per above diagram, Class C extends Class A and Class B both.

In Multilevel Inheritance, one class can inherit from a derived class. Hence, the derived class becomes the base class for the new class.

As per shown in diagram Class C is subclass of B and B is a of subclass Class A.

In Hierarchical Inheritance, one class is inherited by many sub classes.

As per above example, Class B, C, and D inherit the same class A.

As per above example, all the public and protected members of Class A are inherited into Class D, first via Class B and secondly via Class C.

Inheritance is important since it leads to the reusability of code.

Here is an example of inheritance in Java:

The super keyword is similar to “this” keyword.

The keyword super can be used to access any data member or methods of the parent class.

Super keyword can be used at variable, method and constructor level.

Also Check:- this Keyword in Java: What is & How to use with Example

Learn Inheritance in OOP’s with Example

Consider the same banking application from the previous example.

We are supposed to open two different account types, one for saving and another for checking (also known as current).

Let’s compare and study how we can approach coding from a structured and object-oriented programming perspective.

Structural approach: In structured programming, we will create two functions –

Since the working of these functions remains same across the accounts. 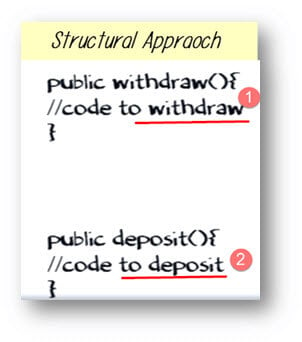 OOP’s approach: While using the OOPs programming approach. We would create two classes. 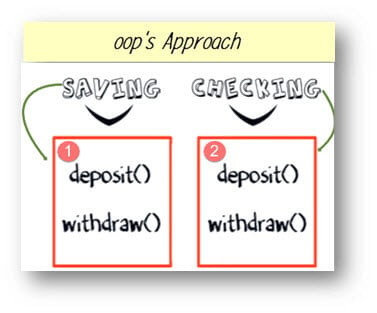 Now there is a change in the requirement specification for something that is so common in the software industry. You are supposed to add functionality privileged Banking Account with Overdraft Facility. For a background, overdraft is a facility where you can withdraw an amount more than available the balance in your account. 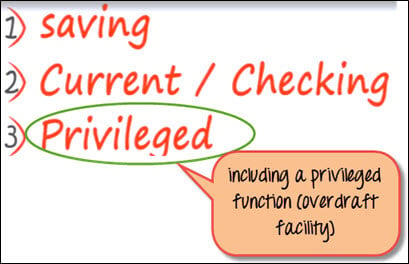 Structural approach: Using functional approach, I have to modify my withdraw function, which is already tested and baselined. And add a method like below will take care of new requirements. 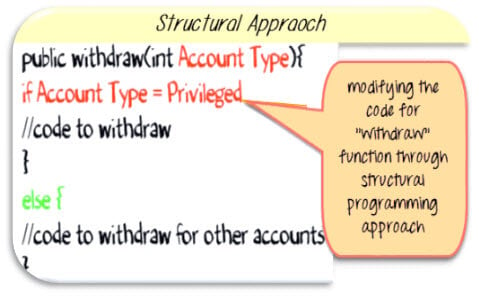 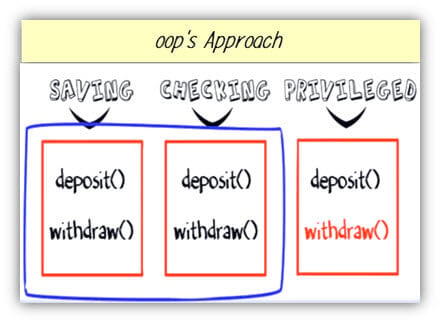 What if the requirement changes further? Like to add credit card account with its own unique requirement of deposits. 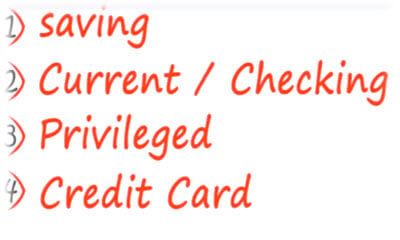 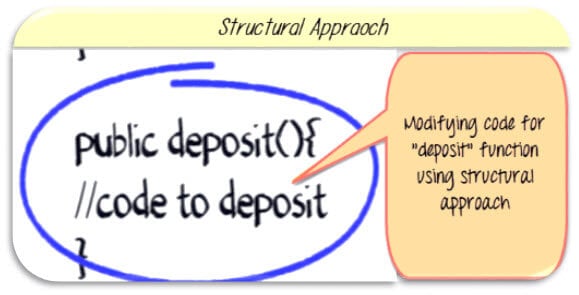 OOP’s approach: But using object-oriented approach, you will just create a new class with its unique implementation of deposit method ( highlighted red in the image below).

So even though the structural programming seems like an easy approach initially, OOP’s wins in a long term. 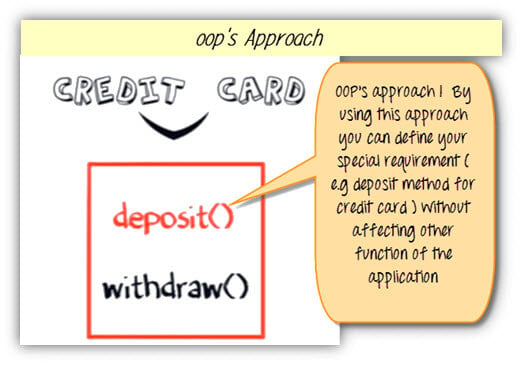 Advantages of Inheritance in OOPs

But one may argue that across all classes, you have a repeated pieces of code.

To overcome this, you create a parent class, say “account” and implement the same function of deposit and withdraw. And make child classes inherited “account” class. So that they will have access to withdraw and deposit functions in account class.

The functions are not required to be implemented individually. This is Inheritance in java. .