What is MapReduce? How it Works - Hadoop MapReduce Tutorial

MAPREDUCE is a software framework and programming model used for processing huge amounts of data. MapReduce program work in two phases, namely, Map and Reduce. Map tasks deal with splitting and mapping of data while Reduce tasks shuffle and reduce the data.

The input to each phase is key-value pairs. In addition, every programmer needs to specify two functions: map function and reduce function.

In this beginner training, you will learn-

Let's understand this with an example –

Consider you have following input data for your Map Reduce Program

The final output of the MapReduce task is

The data goes through the following phases

This is the very first phase in the execution of map-reduce program. In this phase data in each split is passed to a mapping function to produce output values. In our example, a job of mapping phase is to count a number of occurrences of each word from input splits (more details about input-split is given below) and prepare a list in the form of <word, frequency>

This phase consumes the output of Mapping phase. Its task is to consolidate the relevant records from Mapping phase output. In our example, the same words are clubed together along with their respective frequency.

In our example, this phase aggregates the values from Shuffling phase i.e., calculates total occurrences of each word.

Hadoop divides the job into tasks. There are two types of tasks:

The complete execution process (execution of Map and Reduce tasks, both) is controlled by two types of entities called a

For every job submitted for execution in the system, there is one Jobtracker that resides on Namenode and there are multiple tasktrackers which reside on Datanode. 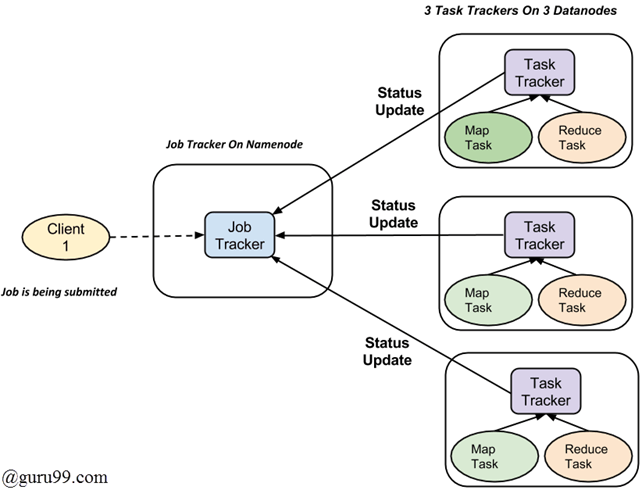 There are many front-end development tools that accelerate web development. Here is a curated list of...

1) What is ServiceNow? ServiceNow is a cloud-based IT Service Management tool. It offers a single...

What is crontab? Cron is named after Greek word "Chronos" that is used for time. It is a system...

Sites For Free Online Education helps you to learn courses at your comfortable place. The courses...

What is 32-Bit? 32-bit is a type of CPU architecture which is capable of transferring 32 bits of...