LoadRunner supports various development tools, technologies and communication protocols. In fact, this is the only tool in market which supports such a large number of protocols to conduct Performance Testing. Performance Test Results produced by LoadRunner software are used as a benchmark against other tools 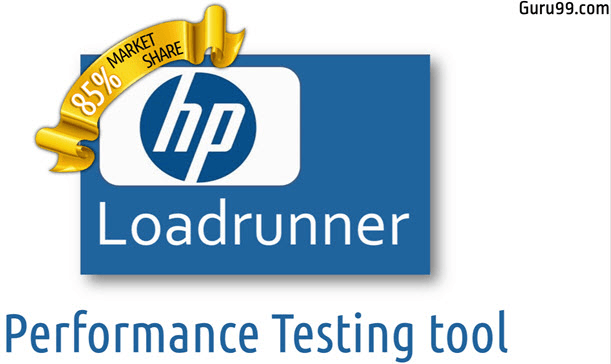 Broadly, LoadRunner tool supports RIA (Rich Internet Applications), Web 2.0 (HTTP/HTML, Ajax, Flex and Silverlight etc.), Mobile, SAP, Oracle, MS SQL Server, Citrix, RTE, Mail and above all, Windows Socket. There is no competitor tool in the market which could offer such wide variety of protocols vested in a single tool. 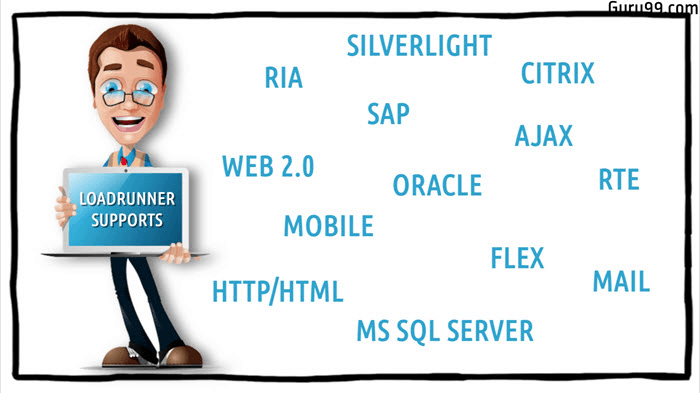 LoadRunner software is tightly integrated with other HP Tools like Unified Functional Test (QTP) & ALM (Application Lifecycle Management) with empowers you to perform your end to end Testing Processes.

LoadRunner works on a principal of simulating Virtual Users on the subject application. These Virtual Users also termed as VUsers, replicate client’s requests and expect a corresponding response to passing a transaction.

Why do you need Performance Testing?

An estimated loss of 4.4 billion in revenue is recorded annually due to poor web performance.

In today’s age of Web 2.0, users click away if a website doesn’t respond within 8 seconds. Imagine yourself waiting for 5 seconds when searching for Google or making a friend request on Facebook. The repercussions of performance downtime are often more devastating than ever imagined. We’ve examples such as those that recently hit Bank of America Online Banking, Amazon Web Services, Intuit or Blackberry.

According to Dunn & Bradstreet, 59% of Fortune 500 companies experience an estimated 1.6 hours of downtime every week. Considering the average Fortune 500 company with a minimum of 10,000 employees is paying $56 per hour, the labor part of downtime costs for such an organization would be $896,000 weekly, translating into more than $46 million per year.

It’s estimate that companies lost sales worth $1100 per second due to a recent Amazon Web Service Outage.

When a software system is deployed by an organization, it may encounter many scenarios that possibly result in performance latency. A number of factors cause decelerating performance, few examples may include:

What is LoadRunner Architecture?

Broadly speaking, the architecture of HP LoadRunner is complex, yet easy to understand.

Suppose you are assigned to check the performance of Amazon.com for 5000 users

In a real-life situation, these all these 5000 users will not be at homepage but in a different section of the websites. How can we simulate differently.

VUGen or Virtual User Generator is an IDE (Integrated Development Environment) or a rich coding editor. VUGen is used to replicate System Under Load (SUL) behavior. VUGen provides a “recording” feature which records communication to and from client and Server in form of a coded script – also called VUser script.

So considering the above example, VUGen can record to simulate following business processes:

Once a VUser script is finalized, Controller is one of the main LoadRunner components which controls the Load simulation by managing, for example:

1) 3500 Users are Surfing the Products Page of Amazon.com

Even more complex scenarios are possible

HP LoadRunner Controller is responsible to simulate thousands of VUsers – these VUsers consume hardware resources for example processor and memory – hence putting a limit on the machine which is simulating them. Besides, Controller simulates these VUsers from the same machine (where Controller resides) & hence the results may not be precise. To address this concern, all VUsers are spread across various machines, called Load Generators or Load Injectors.

As a general practice, Controller resides on a different machine and load is simulated from other machines. Depending upon the protocol of VUser scripts and machine specifications, a number of Load Injectors may be required for full simulation. For example, VUsers for an HTTP script will require 2-4MB per VUser for simulation, hence 4 machines with 4 GB RAM each will be required to simulate a load of 10,000 VUsers.

Taking Analogy from our Amazon Example, the output of this component will be

Once Load scenarios have been executed, the role of “Analysis” components of LoadRunner comes in.

During the execution, Controller creates a dump of results in raw form & contains information like, which version of LoadRunner created this results dump and what were configurations.

All the errors and exceptions are logged in a Microsoft access database, named, output.mdb. The “Analysis” component reads this database file to perform various types of analysis and generates graphs.

These graphs show various trends to understand the reasoning behind errors and failure under load; thus help to figure whether optimization is required in SUL, Server (e.g. JBoss, Oracle) or infrastructure.

Below is an example where bandwidth could be creating a bottleneck. Let’s say Web server has 1GBps capacity whereas the data traffic exceeds this capacity causing subsequent users to suffer. To determine system caters to such needs, Performance Engineer needs to analyze application behavior with an abnormal load. Below is a graph LoadRunner generates to elicit bandwidth.

How to Do Performance Testing

Performance Testing Roadmap can be broadly divided into 5 steps:

Now that you’ve LoadRunner installed, let’s understand the steps involved in the process one by one.

Step 1) Planning for the Load Test

Planning for Performance Testing is different from planning a SIT (System Integration Testing) or UAT (User Acceptance Testing). Planning can be further divided into small stages as described below: 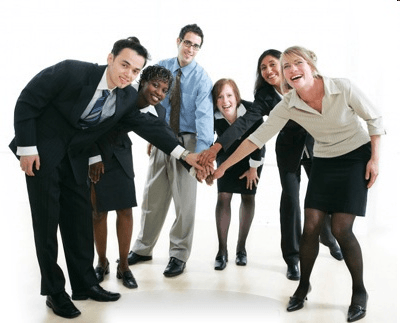 When getting started with LoadRunner Testing, it is best to document who will be participating in the activity from each team involved during the process.

Nominate the project manager who will own this activity and serve as point person for escalation.

Provides blueprint of the SUL

Successful Load Testing requires that you plan to carry out certain business process. A Business Process consists of clearly defined steps in compliance with desired business transactions – so as to accomplish your load testing objectives.

A requirements metric can be prepared to elicit user load on the system. Below is an example of an attendance system in a company:

Similarly, we can conclude the total number of users connected to the application (SUL) at any hour of the day. This is calculated in the last row.

The above 2 facts combined give us the total number of users with which we need to test the system for performance.

Statistics and observations drawn from Performance Testing are greatly influenced by numerous factors as briefed earlier. It is of critical significance to prepare Test Data for Performance Testing. Sometimes, a particular business process consumes a data set and produces a different data set. Take below example:

In this situation, User B need to have 200 contracts ‘created’ in the system. Besides, user C needs 150 contracts as “approved” in order to simulate a load of 150 users.

Speculate each and every factor which could possibly affect the performance of a system. For example, having reduced hardware will have potential impact on the SUL(System Under Load) performance.

Enlist all factors and set up monitors so you can gauge them. Here are few examples:

Next step after planning is to create VUser scripts.

Next step is to create your Load Scenario

Scenario execution is where you emulate user load on the server by instructing multiple VUsers to perform tasks simultaneously.

You can set the level of a load by increasing and decreasing the number of VUsers that perform tasks at the same time.

This execution may result in the server to go under stress and behave abnormally. This is the very purpose of the performance Testing. The results drawn are then used for detailed analysis and root cause identification.

During scenario execution, LoadRunner records the performance of the application under different loads. The statistics drawn from test execution are saved and details analysis is performed. The ‘HP Analysis’ tool generates various graphs which help in identifying the root causes behind a lag of system performance, as well as a system failure.

Some of the graphs obtained include:

Which Applications should we Performance Test?

For example, Microsoft Calculator is neither client-server based nor it runs multiple users; hence it is not a candidate for Performance Testing.

It is of significance to understand the difference between Performance Testing and Performance Engineering. An understanding is shared below:

Performance Testing is a discipline concerned with testing and reporting the current performance of a software application under various parameters.

Performance engineering is the process by which software is tested and tuned with the intent of realizing the required performance. This process aims to optimize the most important application performance trait i.e. user experience.

Historically, testing and tuning have been distinctly separate and often competing realms. In the last few years, however, several pockets of testers and developers have collaborated independently to create tuning teams. Because these teams have met with significant success, the concept of coupling performance testing with performance tuning has caught on, and now we call it performance engineering.