HBase Architecture and its Important Components

Below is a detailed architrecutre of HBase with components:

In this tutorial- you will learn,

HMaster in HBase is the implementation of a Master server in HBase architecture. It acts as a monitoring agent to monitor all Region Server instances present in the cluster and acts as an interface for all the metadata changes. In a distributed cluster environment, Master runs on NameNode. Master runs several background threads.

The following are important roles performed by HMaster in HBase.

Some of the methods exposed by HMaster Interface are primarily Metadata oriented methods.

The client communicates in a bi-directional way with both HMaster and ZooKeeper. For read and write operations, it directly contacts with HRegion servers. HMaster assigns regions to region servers and in turn, check the health status of region servers.

In entire architecture, we have multiple region servers. Hlog present in region servers which are going to store all the log files.

When HBase Region Server receives writes and read requests from the client, it assigns the request to a specific region, where the actual column family resides. However, the client can directly contact with HRegion servers, there is no need of HMaster mandatory permission to the client regarding communication with HRegion servers. The client requires HMaster help when operations related to metadata and schema changes are required.

HRegionServer is the Region Server implementation. It is responsible for serving and managing regions or data that is present in a distributed cluster. The region servers run on Data Nodes present in the Hadoop cluster.

HMaster can get into contact with multiple HRegion servers and performs the following functions.

HRegions are the basic building elements of HBase cluster that consists of the distribution of tables and are comprised of Column families. It contains multiple stores, one for each column family. It consists of mainly two components, which are Memstore and Hfile.

It is an open source project, and it provides so many important services.

Master and HBase slave nodes ( region servers) registered themselves with ZooKeeper. The client needs access to ZK(zookeeper) quorum configuration to connect with master and region servers.

During a failure of nodes that present in HBase cluster, ZKquoram will trigger error messages, and it starts to repair the failed nodes.

HDFS is a Hadoop distributed File System, as the name implies it provides a distributed environment for the storage and it is a file system designed in a way to run on commodity hardware. It stores each file in multiple blocks and to maintain fault tolerance, the blocks are replicated across a Hadoop cluster.

In here, the data stored in each block replicates into 3 nodes any in a case when any node goes down there will be no loss of data, it will have a proper backup recovery mechanism.

HDFS get in contact with the HBase components and stores a large amount of data in a distributed manner.

That apart, HBase can be used

HBase is a column-oriented database and data is stored in tables. The tables are sorted by RowId. As shown below, HBase has RowId, which is the collection of several column families that are present in the table.

The column families that are present in the schema are key-value pairs. If we observe in detail each column family having multiple numbers of columns. The column values stored into disk memory. Each cell of the table has its own Metadata like timestamp and other information.

The following Table gives some key differences between these two storages

The Read and Write operations from Client into Hfile can be shown in below diagram. 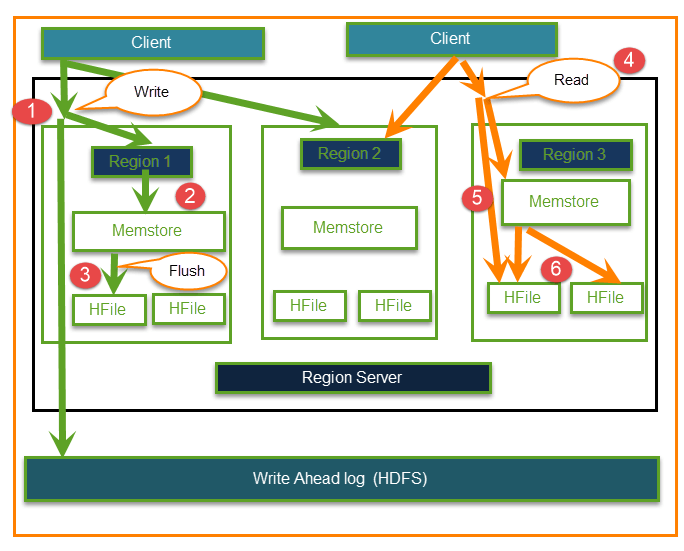 Step 3) First data stores into Memstore, where the data is sorted and after that, it flushes into HFile. The main reason for using Memstore is to store data in a Distributed file system based on Row Key. Memstore will be placed in Region server main memory while HFiles are written into HDFS.

Step 5) In turn Client can have direct access to Mem store, and it can request for data.

Step 6) Client approaches HFiles to get the data. The data are fetched and retrieved by the Client.

Memstore holds in-memory modifications to the store. The hierarchy of objects in HBase Regions is as shown from top to bottom in below table.

HBase runs on top of HDFS and Hadoop. Some key differences between HDFS and HBase are in terms of data operations and processing.