Hardware is a physical device or a component of a computer that is physically connected to the computer. These are the primary electronic devices used to build up the computer. Examples of Hardware are a computer Processor (Central Processing Unit), Memory devices (RAM), Monitor, Keyboard, Mouse, and storage devices (HDD or SSD).

Without Hardware, computer devices cannot function, and software would have nothing to run on. Hardware and software interact with each other, and the software tells Hardware which tasks it needs to perform.

Here are the four most important components of Hardware:

We are living in an age of information technology. Software is a program or set of programs that perform some specific operations. There are mainly two types of software:

System Software is a set of programs that control and manage the operations of computer hardware. It also helps application programs to execute correctly.

Application Software is a program that does real work for the user. It is mostly created to perform a specific task for a user.

Application Software acts as a mediator between the end-user and System Software. It is also known as an application package. This type of software is written using a high-level language like C, Java, VB.Net, etc. It is user-specific and is designed to meet the requirements of the user.

Differences between Hardware and Software 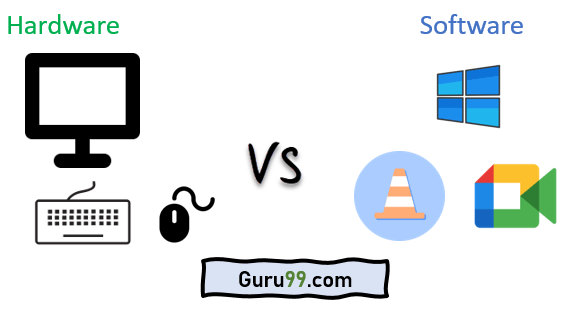 Here are some important points that distinguish Hardware and Software:

Here are some important hardware components:

A keyboard is a hardware device that allows the user to input data. The layout of the keyboard closely resembles a typewriting machine with additional keys. A mouse is also an input device that consists of three elements: 1) Left click, 2) Right-click, and 3) Rolling wheel.

According to your mouse movement, you can control the position of the cursor on the screen. Joysticks, Light Pen, Scanner, and Barcode reader, are some common examples of input devices.

Output devices are the peripheral devices that mostly receive data from the computer and display the results to the user. It can be a display (Monitor), projector, or any other device.

The monitor is an example of an output device that displays the data or visuals from the computer. Another output device is a printer that helps you to print the details into paper.

Can you have Hardware without the software?

While a computer cannot run without Hardware, however, the software is also needed for Hardware to operate. For example, your favorite video game or video conferencing platform are both examples of software that needs computer hardware, like video cards, memory, processors, monitor and sound devices, to work how you want it to work.

Can you have software without Hardware?

In some situations, a computer can run without software being installed. However, if an interpreter or operating system is not found at that time, it either shows an error or does not output any information. A computer needs, both the user and software, to interact with the computer hardware.

Installing programs onto the computer and operating system is necessary for the computer’s additional capabilities. For example, a word processor is not needed, but it allows you to create documents and letters very easily.