What is Continuous Testing?

How is Continuous Testing different?

The old way of testing was hand off centric. The software was handed off from one team to another. A project would have definite Development and QA phases. QA teams always wanted more time to ensure quality. The goal was that the quality should prevail over project schedule.

However, business wants faster delivery of software to the end user. The newer is the software, the better it can be marketed and increase revenue potential of the company. Hence, a new way of testing was evolved.

Continuous means undisrupted testing done on a continuous basis. In a Continuous DevOps process, a software change (release candidate) is continuously moving from Development to Testing to Deployment.

The code is continuously developed, delivered, tested and deployed.

For Example, whenever a developer checks the code in the Source Code Server like Jenkins automated set of unit tests are executed in the continuous process. If the tests fail, the build is rejected, and the developer is notified. If the build passes the test, it is deployed to performance, QA servers for exhaustive functional and load tests. The tests are run in parallel. If the tests pass, the software is deployed in production.

Continuous Testing is a small cog in the Continuous Development, Integration and Deployment Cycle. 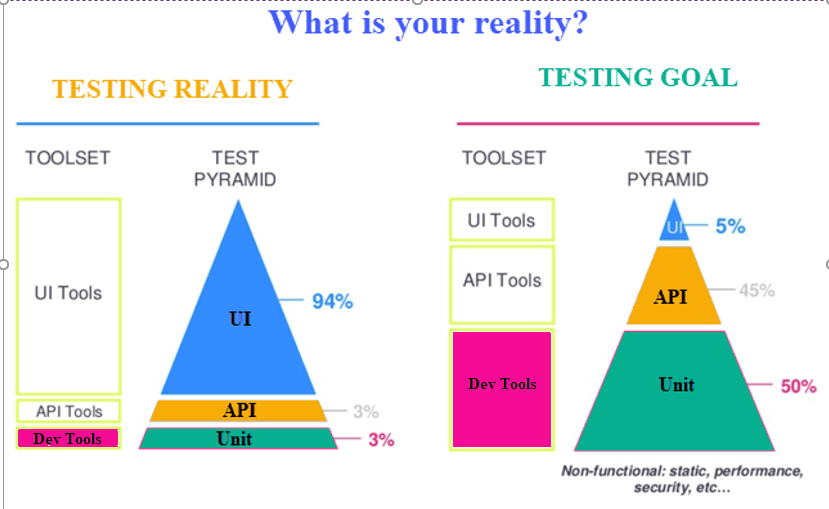 Software development is not same as it is in the past we cut development from month to weeks. The current testing stack (see figure above) is titled towards UI testing. But the goal is to have more and more automated unit tests.

How Is Continuous Testing Different from Test Automation?

How to do Continuous Testing

Here is a curated list of best Continuous Testing Tools :

Jenkins is a Continuous Integration tool which is written using Java language. This tool can be configured via GUI interface or console commands.

Travis is continuous testing tool hosted on the GitHub. It offers hosted and on-premises variants. It provides a variety of different languages and a good documentation.