What is a Function in C?

Function in C programming is a reusable block of code that makes a program easier to understand, test and can be easily modified without changing the calling program. Functions divide the code and modularize the program for better and effective results. In short, a larger program is divided into various subprograms which are called as functions

When you divide a large program into various functions, it becomes easy to manage each function individually. Whenever an error occurs in the program, you can easily investigate faulty functions and correct only those errors. You can easily call and use functions whenever they are required which automatically leads in saving time and space.

Every ‘C’ program has at least one function which is the main function, but a program can have any number of functions. The main () function in C is a starting point of a program.

In ‘C’ programming, functions are divided into two types:

The difference between the library and user-defined functions in C is that we do not need to write a code for a library function. It is already present inside the header file which we always include at the beginning of a program. You just have to type the name of a function and use it along with the proper syntax. Printf, scanf are the examples of a library function.

Whereas, a user-defined function is a type of function in which we have to write a body of a function and call the function whenever we require the function to perform some operation in our program.

A user-defined function in C is always written by the user, but later it can be a part of ‘C’ library. It is a major advantage of ‘C’ programming.

C programming functions are divided into three activities such as,

The function declarations (called prototype) are usually done above the main () function and take the general form:

Keep in mind that a function does not necessarily return a value. In this case, the keyword void is used.

A function’s arguments are used to receive the necessary values by the function call. They are matched by position; the first argument is passed to the first parameter, the second to the second parameter and so on.

By default, the arguments are passed by value in which a copy of data is given to the called function. The actually passed variable will not change.

We consider the following program which demonstrates parameters passed by value:

The program output is:

Keep in mind that the values of a and b were passed to add function were not changed because only its value was passed into the parameter x.

Variable scope means the visibility of variables within a code of the program.

In C, variables which are declared inside a function are local to that block of code and cannot be referred to outside the function. However, variables which are declared outside all functions are global and accessible from the entire program. Constants declared with a #define at the top of a program are accessible from the entire program. We consider the following program which prints the value of the global variable from both main and user defined function :

We discuss the program details: 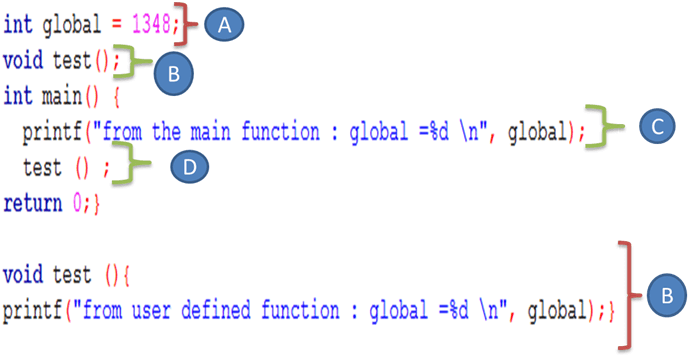 In C, when arguments are passed to function parameters, the parameters act as local variables which will be destroyed when exiting the function.

When you use global variables, use them with caution because can lead to errors and they can change anywhere in a program. They should be initialized before using.

This calculation is done as repeatedly calculating fact * (fact -1) until fact equals 1.

Consider the following chart to more understand the recursive mechanism which consists of calling the function its self until the base case or stopping condition is reached, and after that, we collect the previous values: 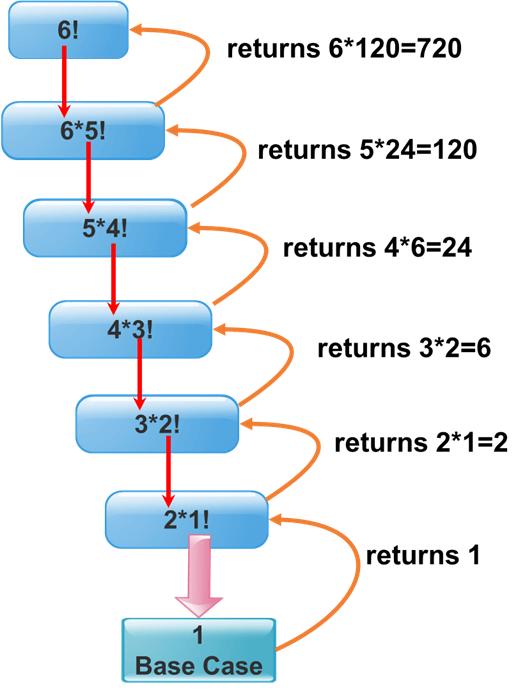 Function in C programming is used to store the most frequently used instructions. It is used for modularizing the program.

Whenever we use functions, we require an extra pointer head to jump to the function definition and return to the statement. To eliminate the need of such pointer heads, we use inline functions.

In an inline function, a function call is directly replaced by an actual program code. It does not jump to any block because all the operations are performed inside the inline function.

Inline functions are mostly used for small computations. They are not suitable when large computing is involved.

An inline function is similar to the normal function except that keyword inline is place before the function name. Inline functions are created with the following syntax:

Let us write a program to implement an inline function.

Above program demonstrates the use of an inline function for addition of two numbers. As we can see, we have returned the addition on two numbers within the inline function only without writing any extra lines. During function call we have just passed values on which we have to perform addition.