In this tutorial, we are going to focus on the last point which is the most important part of web services, and that is the WSDL or the Web services description language.

Structure of a WSDL Document

A WSDL document is used to describe a web service. This description is required, so that client applications are able to understand what the web service actually does.

The WSDL file itself can look very complex to any user, but it contains all the necessary information that any client application would require to use the relevant web service.

Below is the general structure of a WSDL file

One key thing to note here is that definition of messages, which is what is passed by the SOAP protocol is actually defined in the WSDL document.

The WSDL document actually tells a client application what are the types of SOAP messages which are sent and accepted by the Web service.

Below is a diagram of the structure of a WSDL file

A web service is an important component in building modern day web applications. Their main purpose is to allow multiple applications built on various programming languages to talk to each other. For instance, we can have a .Net web application talks to a Java application via a Web service.

A web service has the following key features

The WSDL file is written in plain old XML. The reason that it is in XML is so that the file can be read by any programming language. 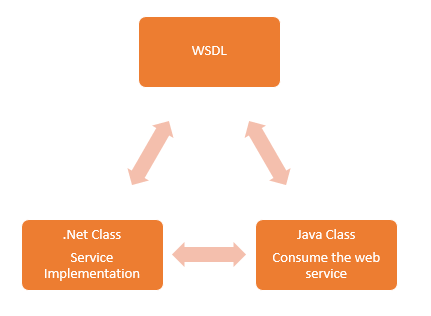 The WSDL file is what binds everything together. From the above diagram, you can see that you can create a web service in the .Net language.

So this is where the service gets implemented. If you did not have the WSDL file and wanted a Java class to consume the web service, you would need a lot of coding effort to achieve this.

But now with the WSDL file which is in XML, which can be understood by any programming language, you can now easily have a Java class consume the .Net web service. Hence, the amount of coding effort is greatly reduced.

The WSDL consists of a section called “messages” which is denoted by the <message> element.

This element is basically used to describe the data that gets exchanged between the web service and the client application.

Each web service will always have 2 types of messages,

Each message, in turn, will have a <part> element which is used to describe the parameter used by the input and output message.

Ports are used in WSDL to define one complete operation which is offered by the web service.

WSDL provides an element called <portType> which is used to define the operations provided by the Web service. 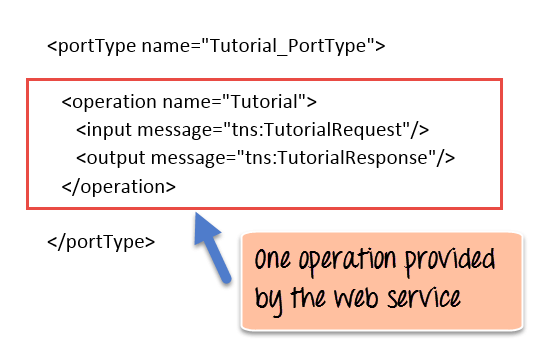 So in our above example we can note the following:

In addition to the <portType> element, there is also the <binding> element which is used to define how the messages will be transferred.

The WSDL file gets created whenever a web service is built in any programming language.

Since the WSDL file is pretty complicated to be generated from plain scratch, all editors such as Visual Studio for .Net and Eclipse for Java automatically create the WSDL file.

Below is an example of a WSDL file created in Visual Studio.

The above WSDL file looks very intimidating to any user, we will cover the different parts in detail in the subsequent tutorials, but for now, let’s have a summary look at what each section of the WSDL file actually does

Now let’s look at an example of how we can publish a web service and consume it by using Visual Studio.

In this example, we will create a web service with one WebMethod. This method will accept an Integer parameter called “TutorialID.” The Web method will then return a string called “Web Services.”

We will then create a console based application, which will consume this web service and call our web method accordingly.

Let’s look at the steps required to carry out this example.

Step 1) The first step is to create your web service. The detailed steps of how the Asp.Net web project and a web service is created has been explained here; Please follow the same steps to create the project and web service accordingly. The key part is to enter the below code in the Web services file.

Step 2) Once we have defined the web services file, the next step is to create a client project which will consume this web service. 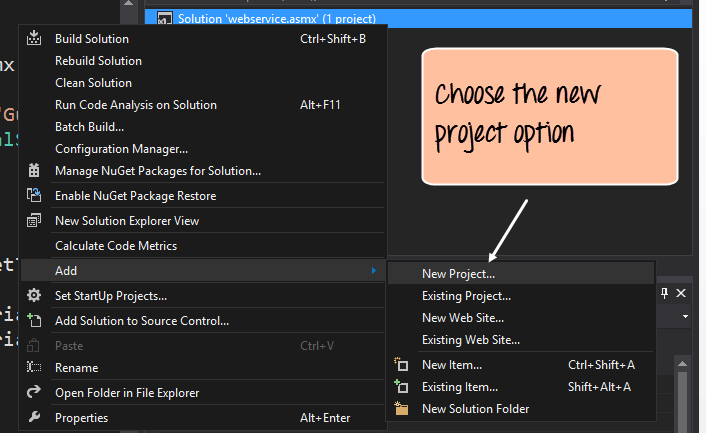 Step3) In this step, 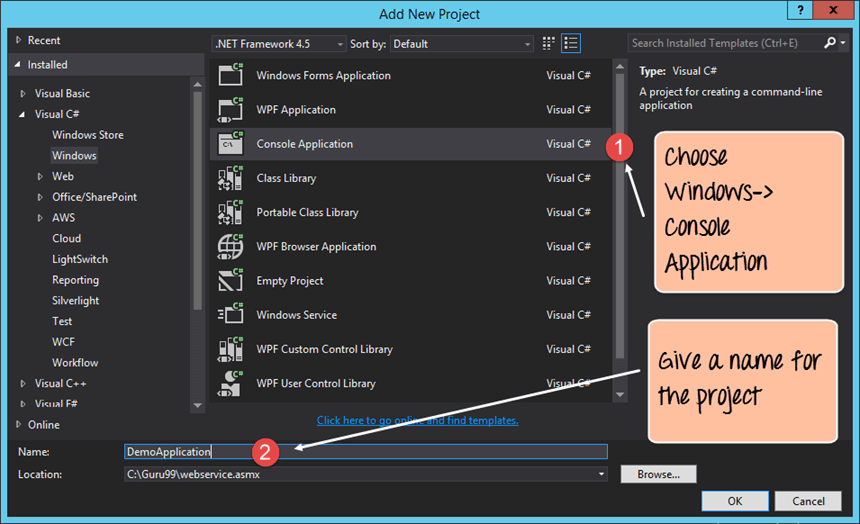 After you click the OK button in the above screen, you will be able to see the project in the Solution explorer in Visual Studio. 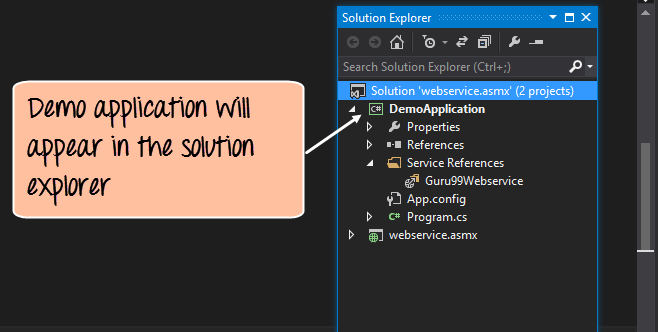 To complete this step, right-click the DemoApplication project and choose the option “Set as StartUp Project.” 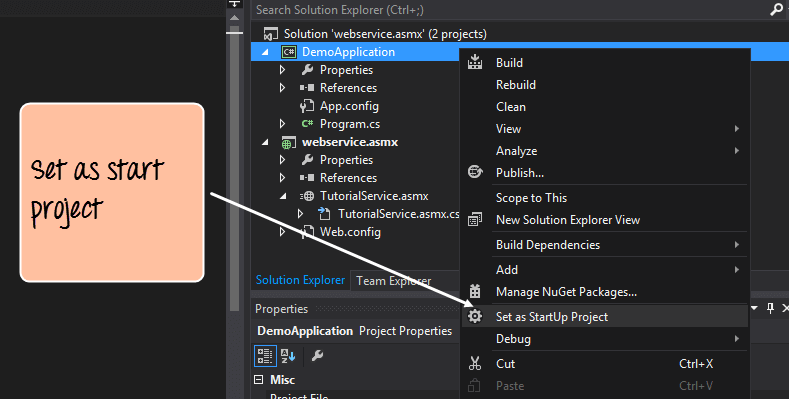 Step 5) The next step is to add the service reference of our “Guru99Webservice” to our console application. This is done so that the DemoApplication can reference the web service and all of the web methods in the web service.

To do this, right-click the DemoApplication project file and choose the menu option Add->Service Reference. 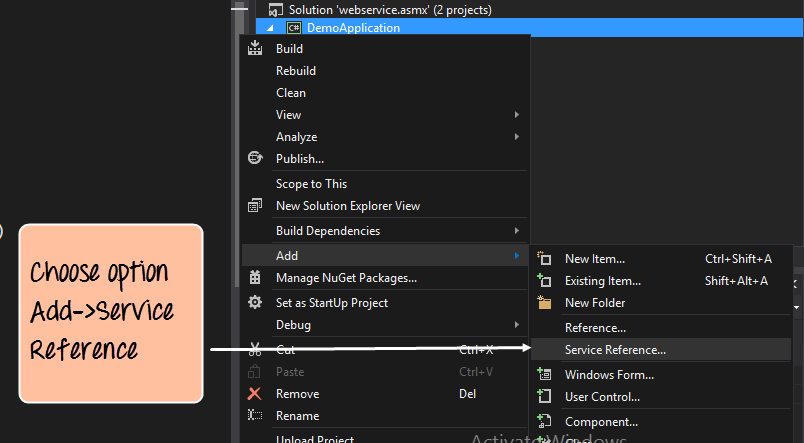 Step 6) In this step, we will provide the different values which are required to add our service reference 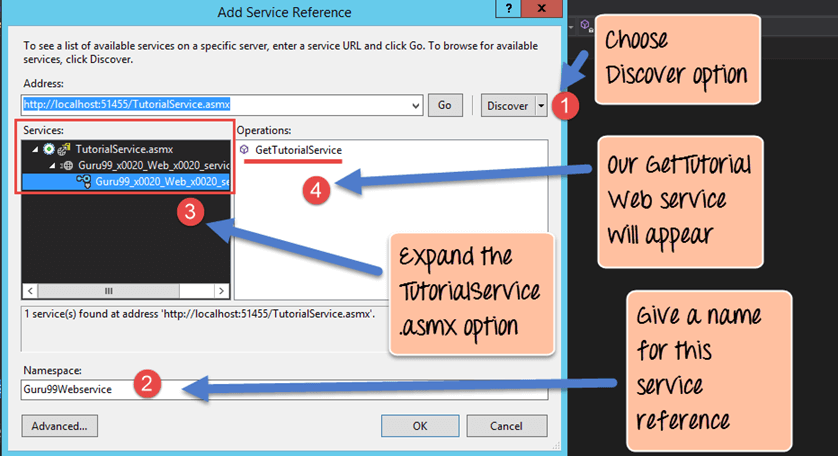 When we click on the ‘OK’ button, all of the required code to access this web service will be added to our DemoApplication Console application as shown below.

The screenshot shows that the “Guru99Webservice” was successfully added to our console application.

When all of the above steps are followed, and the DemoApplication is run the below output will be displayed. 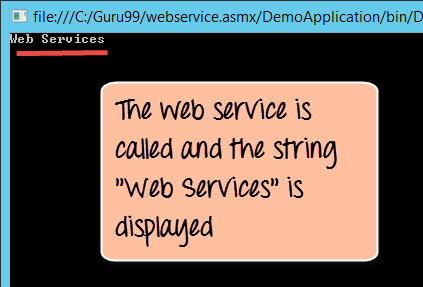 From the output, we can clearly see that the DemoApplication calls our Web service and that the string returned by the Web service is displayed in our Console log.