Software testing is the process of verifying and validating a software application to check whether it is working as expected. The intent is to find defects and improve product quality. There are two ways to test software, namely Positive Testing, and Negative Testing.

There is a text box in an application which can accept only numbers. Entering values up to 99999 will be acceptable by the system and any other values apart from this should not be acceptable. To do positive testing, set the valid input values from 0 to 99999 and check whether the system is accepting the values. 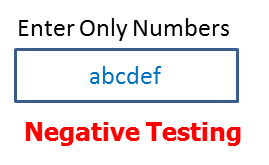 Negative testing can be performed by entering characters A to Z or from a to z. Either software system should not accept the values or else it should throw an error message for these invalid data inputs.

In both the testing, the following needs to be considered:

Following techniques are used for Positive and negative validation of testing is: 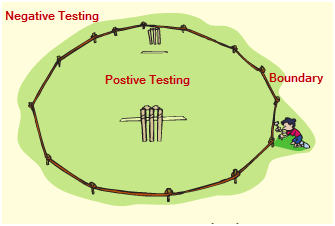 A system can accept the numbers from 0 to 10 numeric values. All other numbers are invalid values. Under this technique, boundary values -1,0,1 and 9,10,11 will be tested.

Numeric values Zero to ten can be divided into two (or three) partitions. In our case, we have two partitions -10 to -1 and 0 to 10. Sample values (5 and -5) can be taken from each part to test the scenarios.

Testing helps deliver quality software application and ensures the software is bug-free before the software is launched. For effective testing, use both – Positive and Negative testing which give enough confidence in the quality of the software. Real-time users are can input any values and those needs to be tested before release.