What is String in PHP?

A string is a collection of characters. String is one of the data types supported by PHP.

The string variables can contain alphanumeric characters. Strings are created when;

In this PHP Tutorial, you will learn-

Creating PHP Strings Using Single quotes: The simplest way to create a string is to use single quotes.

Let’s look at an example that creates a simple string in PHP.

If the single quote is part of the string value, it can be escaped using the backslash.

The code below illustrates how to escape a single quote.

Variable names can be used inside double quotes and their values will be displayed.

Let’s look at an example.

In addition to variable interpolations, the double quote string can also escape more special characters such as “\n for a linefeed, \$ dollar for the dollar sign” etc.

More examples Let’s suppose that we have the following code

executing the above codes issues a notice “Notice: Undefined variable”.

This is because $word is treated as a variable.

If we want the dollar sign to be treated as a literal value, we have to escape it.

This heredoc methodology is used to create fairly complex strings as compared to double quotes.

The heredoc supports all the features of double quotes and allows creating string values with more than one line without PHP string concatenation.

Using double quotes to create strings that have multiple lines generates an error.

You can also use double quotes inside without escaping them.

The example below illustrates how the Heredoc method is used to create string values.

<<<EOT is the string delimiter.

EOT is the acronym for end of text.

It should be defined in its on line at the beginning of the string and at the end.

Note: you can use anything you like in place of EOT 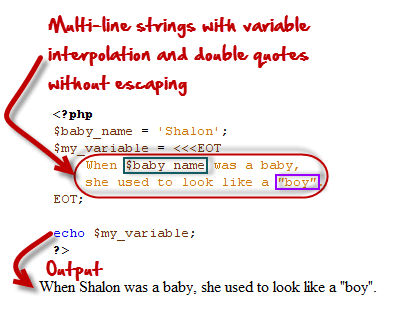 The Nowdoc string creation method is similar to the heredoc method but works like the way single quotes work.

No parsing takes place inside the Nowdoc.

Nowdoc is ideal when working with raw data that do not need to be parsed.

The code below shows the Nowdoc implementation

String functions in PHP are used to manipulate string values.

For a complete list of PHP strings, check https://php.net/manual/en/ref.strings.php