MIS is the use of hardware, software and telecommunication networks to achieve business objectives.

For example, if a person works for a company that has clients in many different locations, they will be required to visit the clients from time to time.

While travelling, they will need access to their cash and all they have to do to access their cash is to go to the nearest ATM machine.They can even use Mobile money from their phones and withdraw cash from any agent.

The following diagram shows the architecture of a typical MIS infrastructure: 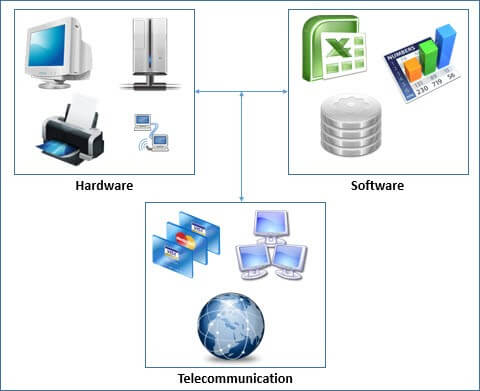 A server is a computer with high computing power and storage space that is used to host shared resources. The server can be used as a database server that stores all of the business transaction. An email server could be used for all emails of the company. A file share could be used for storing the individual files of the organization employees, etc.

Laptops have the same computing power as desktop computers but have the advantage of been portable. With the advent of the internet and virtual private networks, employees can travel with their laptops to remote locations and still be able to access the server at the head office.

Tablets are much easier to carry compared to laptops, and many organizations have business applications that run from tablets. They are also capable of connecting to the server via the internet.

Printers are used to print hardcopies of reports. They vary depending on the use. Some printers have networking capabilities and can be installed on a network and used by more than one person. This reduces the costs of buying individual printers for each computer. Dot-matrix printers are usually very common with the point of sale and bank tellers for printing receipts, deposit slips, etc.

Storage devices are used to store data. The data could be in the form of documents, audio, video, software installation packages, database backups, etc. The most common storage devices are external discs. Storage devices with networking capabilities also exist that can be used to share files on a network. The IT department usually creates file storage directories according to departments and type of data to be stored.

The software runs on top of the hardware. Software refers to computer programs that perform specific tasks. The software is usually divided into two major categories namely system and application software.

Applications such as Excel and Word, are known as off-the-shelf packages. This means you can buy them from authorized dealers and start using them without demanding for any changes. If off the shelf software does not meet the requirements of the organization, then the custom software will have to be developed that meets the specification of the users. Such software is usually developed by companies that specialize in developing software.

A database is a collection of related data stored in one place with minimum redundancy. Most business applications record the day to day business transactions through these databases. There are various databases available for accessing and storing data like RDBMS, NoSQL, XML, etc.

Examples of NoSQL databases include

Database designing is concerned with understanding the data storage and retrieval requirements of an organization and developing detailed data models of the database.

Networking devices are used to link computers and other telecommunication devices together. The devices used to create a network depend on the type of network work that you want. For example, a wired Local Area Networks (LANs) will require a network switch and RJ-45 cables.

Think of a business such as Facebook. Every month billions of users submit data to Facebook. Facebook, in turn, uses this data to accurately select posts which are relevant to the user and make friends suggestions which are almost 100% accurate every time.

Data structures and algorithms are an efficient way of organizing and managing data, especially large datasets. Data structures usually refer to the way the data is stored.

For example, a class is a representation of a real-world entity. A customer class will contain properties i.e. name, account number, address, etc. and methods i.e. make a purchase, make a payment, etc.

The following image illustrates the concept of a class; 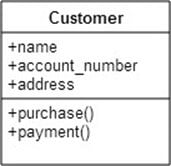 Other examples of data structures include arrays, records, sets and graphs.

An algorithm refers to the operations that can be performed on the data.