VBScript (Visual Basic Script) is developed by Microsoft with the intention of developing dynamic web pages. It is client-side scripting language like JavaScript. VBScript is a light version of Microsoft Visual Basic. The syntax of VBScript is very similar to that of Visual Basic. If you want your webpage to be more lively and interactive, then you can incorporate VBScript in your code.

VBScript is just a scripting language. So, it cannot run its code on its own. It needs a bigger programming language to host it.

In this tutorial, you will learn more about-

Right now, there are 3 environments where VB Scripts can run.

How to Create a Simple VBScript?

You only need 2 simple tools to create and run VBScript code throughout this tutorial:

In this tutorial series, we will embed our VBScript code within a very basic HTML code.

This way, we can see VBScript in action by running the particular HTML file on the Internet Explorer web browser.

Open your text editor (Here, Notepad is used. You can use whichever text editor you want) and add the following lines of code.

Now your text editor will look like this (the appearance and layout could be different based on the text editor you use):

In this program, the following sections constitute the HTML template.

Only the section that starts with <script> comes as part of VB Scripting code.

Whatever string sequence you put in the document.write() will be displayed by IE as page text.

This code will simply output the statement “Yes!!! I have started learning VB Scripting.” on the browser page. 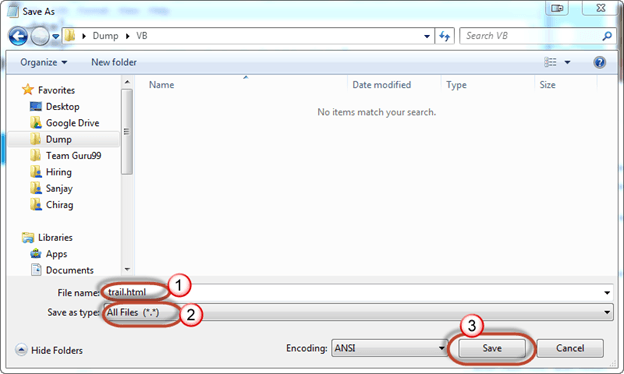 Click the Save button and you will see the file trial.html in the folder where you have saved your file.

To execute the VB Scripting code we have just created, we need to open the trial.html file in Internet Explorer.

If you have set IE as your default browser, you just need to double click the file trial.html.

If you have set any other web browser as your default browser, right-click the file and go to Open With –> Internet Explorer like this: 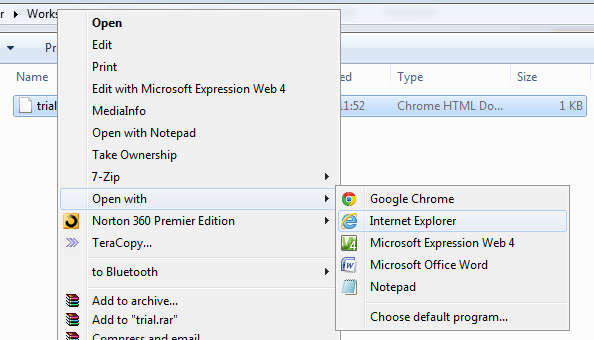 Note: You may be shown a message to make IE your default browser

Now, the IE web browser will be opened with a security warning like this: 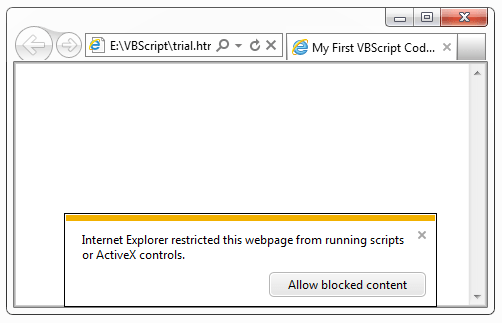 Click “Allow blocked content” and you will be asked whether you want to set IE as your default browser. You can click Yes or No as you want. Now, you will get the following message on IE.

If the code is not working –

The main disadvantage of VBScript is that most browsers except Internet Explorer will not process VBScript code. In other words, if your site has visitors who use a web browser other than Internet Explorer like Chrome, Firefox or Opera, then VBScript will not be useful.

Moreover, VBScript will not run on computers that run on operating systems other than Microsoft Windows including Linux, Mac etc.

Like any other scripting language, VBScript has gone through many changes over the years.

Now, VB Script is used as the default scripting language of ASP.