A hash is a value that has a fixed length, and it is generated using a mathematical formula. Hash values are used in data compression, cryptology, etc. In data indexing, hash values are used because they have fixed length size regardless of the values that were used to generate them. It makes hash values to occupy minimal space compared to other values of varying lengths.

A hash function employs a mathematical algorithm to convert the key into a hash. A collision occurs when a hash function produces the same hash value for more than one key.

In this Algorithm tutorial, you will learn:

What is a Hash Table?

A HASH TABLE is a data structure that stores values using a pair of keys and values. Each value is assigned a unique key that is generated using a hash function.

The name of the key is used to access its associated value. This makes searching for values in a hash table very fast, irrespective of the number of items in the hash table.

For example, if we want to store employee records, and each employee is uniquely identified using an employee number.

The above approach will require extra free space of the order of (m * n2) where the variable m is the size of the array, and the variable n is the number of digits for the employee number. This approach introduces a storage space problem.

A hash function solves the above problem by getting the employee number and using it to generate a hash integer value, fixed digits, and optimizing storage space. The purpose of a hash function is to create a key that will be used to reference the value that we want to store. The function accepts the value to be saved then uses an algorithm to calculate the value of the key.

The following is an example of a simple hash function

We can use the above formula to calculate the positions that each value should occupy.

The following image shows the available indexes in our hash table.

The value 1 will occupy the space on index 1

Calculate the position that will be occupied by the second value

The value 2 will occupy the space on index 2

Calculate the position that will be occupied by the third value.

The value 3 will occupy the space on index 0

Our filled in hash table will now be as follows.

Qualities of a good hash function

A good hash function should have the following qualities.

A collision occurs when the algorithm generates the same hash for more than one value.

Let’s look at an example.

The following table shows the hash values that will be generated.

As we can see from the above results, the values 2 and 9 have the same hash value, and we cannot store more than one value at each position.

The given problem can be solved by either using chaining or probing. The following sections discuss chaining and probing in detail.

Chaining is a technique that is used to solve the problem of collision by using linked lists that each have unique indexes. 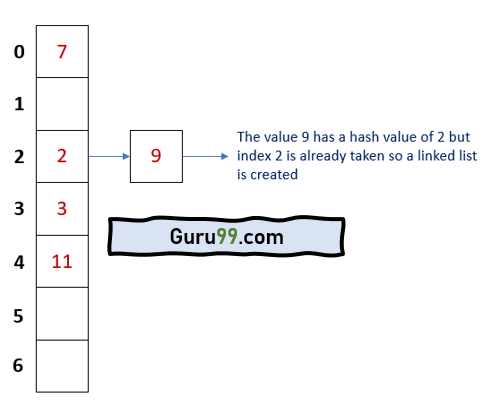 Both 2 and 9 occupy the same index, but they are stored as linked lists. Each list has a unique identifier.

The following are the benefits of chained lists:

The other technique that is used to resolve collision is probing. When using the probing method, if a collision occurs, we can simply move on and find an empty slot to store our value.

The following are the methods of probing:

Using our above example, the hash table after using probing would appear as follows: 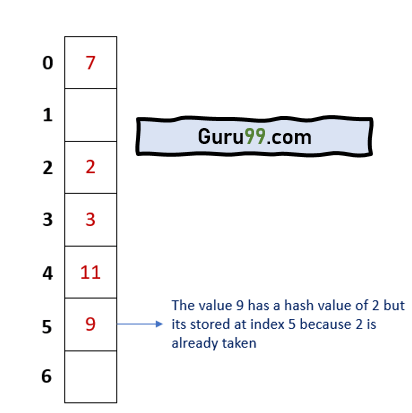 Here, are the Operations supported by Hash tables:

Executing the above code produces the following results.

Python comes with a built-in data type called Dictionary. A dictionary is an example of a hash table. It stores values using a pair of keys and values. The hash values are automatically generated for us, and any collisions are resolved for us in the background.

Running the above code produces the following results.

In the real-world, hash tables are used to store data for