What is an Exception?

An error is an unexpected program result that cannot be handled by the program itself.

Errors are resolved by fixing the program. An example of an error would be an infinite loop that never stops executing.

An exception is unexpected program result that can be handled by the program itself.

Examples of exception include trying to open a file that does not exist.

This exception can be handled by either creating the file or presenting the user with an option of searching for the file.

When an error occurs, depending on your configuration settings, PHP displays the error message in the web browser with information relating to the error that occurred.

PHP offers a number of ways to handle errors.

We are going to look at three (3) commonly used methods;

Let’s suppose that we have developed an application that uses text files to store data. We might want to check for the file’s existence before we attempt to read data from it.

The code below implements the above example.

As you can see from the above results, it makes our application look unprofessional and can be annoying to the user.

Note: it’s a good security practice to display a message as the one shown above instead of showing the message like “File not found”.

Let’s look at another example that uses a custom error handler.

The custom error handler will be set as the default PHP error handling function and will basically display an error number and message.

The code below illustrates the implementation of the above example

Open the URL http://localhost/phptuts/custom_error_handler.php you will get the following results

As you can see from the above example, custom error handlers are powerful in the sense that

Let’s now look at the third type of error handling. We will be using the PHP built in function error_reporting function. It has the following basic syntax

Difference between Errors and Exception

The table below shows the exception object methods


Below is the basic syntax for throwing an exception.

The above code outputs the following message.

We are now going to look at an example that implements the throw and catch exceptions.

We will modify the above example and include the try, throw and catch.

It has the following basic syntax.

The code below shows the basic exception example with the try, throw and catch exception implemented.

The program deliberately throws an exception which it then catches.

Open the URL http://localhost/phptuts/exception_handling.php You will get the following results.

It’s also possible to create multiple exceptions for one php try statement depending on the type of exception thrown.

The flowchart below illustrates the how multiple exceptions work 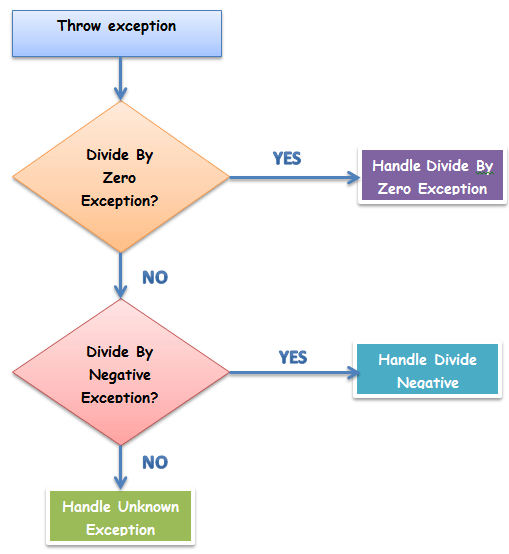 Let’s look at an example that uses multiple exceptions.

We will modify the code that divides a number by the passed in denominator.

We expect two types of exceptions to occur;

For simplicity’s sake, we will only display the exception type in our catch blocks.

The PHP built in Exception class is used to throw exceptions.

We will create two classes that extend the exception class and use them to throw exceptions.

The code below shows the implementation.

Browse to the URL http://localhost/phptuts/multiple_exceptions.php

Switch back to the PHP file and pass -1 as the parameter as shown in the following diagram.

Browse to the URL http://localhost/phptuts/multiple_exceptions.php.

What results do you get? Pass 3 as the parameter.

What results do you get?