Tata Consultancy Services is an Indian multinational information technology company headquartered in Mumbai, with main branches in Pune, Banglore, Hyderabad, and other cities. TCS is the largest IT company in India.

TCS conducts three rounds of interview to select any fresher candidate as a software developer in their company.

The recruitment drive of TCS starts with a written test followed by face to face interview. A recruiter may also conduct campus group discussion for software engineer candidates.

Following are frequently asked TCS interview questions for freshers as well as experienced candidates to get the right job for their career. 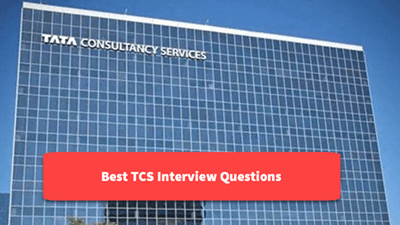 1) Which programming languages are important for TCS campus interview?

2) What is the primary difference between C and Java?

It is an access specifier. The value of a static variable does not change during the execution of the program.

5) How to print an address?

You can use %p in printf function to print an address of a variable.

It is a feature of C++ that allows you to create more than one function with a similar name. Functions can be identified using their parameters.

Referential integrity rule states that the database does not contain orphan record foreign key values. In this case, the primary key value cannot be modified if you have used this value as a foreign key in the child table.

8) Define the term’s classes and objects.

Class is a building blog of object-oriented programming which contains a group of data member and its function. You can access them by creating an instant class.

An object is a real-world entity. Some examples of the object are computer, notebook, pen, and bag.

A macro is a preprocessor directive which replaces the value of a macro.

The primary difference between structure and array is as follows:

11) List out some areas in which data structure is applied extensively.

Following are the areas in which data structure is used:

12) How can you reuse code written in C++ programming language?

You can use inheritance technique to reuse code.

14) What is insertion sort and bubble sort?

Insertion sort is a sorting algorithm in where the final list or array is built having one item at a time. In bubble sort, you interchange adjacent elements if the order is not proper.

A link data structure called a doubly link list includes a link back to the previous node.

16) You are creating a function which can accept a variable number of arguments. Which header file you will include?

We need to include stdarg.h header file.

Data abstraction is a process of recognizing the characteristics of an object or any situation and filtering out unwanted characteristic.

18) Explain what command-line argument in C is?

It is a process of getting arguments from the command prompt in C programming. There are three arguments in C main function. Argument counter, Argument vector, and environment vector.

19) Explain the concept of cache memory.

A cache is a small size computer memory that is used by CPU to reduce average cost to access data from main memory.

20) Explain the difference between pass by reference and pass by value.

In pass by value, we pass the value to calling function. In Pass by reference, we need to pass the address to the caller function instead of passing the value.

A variable which stores the address of value located in memory is called pointer.

22) Differentiate between null and void pointer.

23) What is operator overloading?

Operator overloading is a polymorphism which allows existing operators to be redefined so that they can be used on objects of user-defined classes.

24) What are the different types of inheritance available in C++?

25) Why normalizes a database?

DBMS stands for Database Management System. It is a software used to manage your database. DBMS provides an interface between application and databases.

28) Explain the difference between the foreign key and the referenced key.

A foreign key is used to link to tables.  On the other side, the reference key is a primary key that is referenced in the other table.

29) Explain the difference between C and C++?

An array is a data structure which contains similar elements. The necessary condition to use an array is that all array elements should have the same data type.

There are three functions to allocate memory in C. They are as follows:

32) What is a clustered index?

Clustered index reorders records in a way they physically stored in a table.

A debugger is a computer program. It is used to debug and test other programs.

34) What is the main difference between const char *p and char const *p?

Both are pointers to a constant Char. However, if you write char * const p, then this will declare ‘p’ as a constant pointer to char.

In Data structure, memory alignment is a method to arrange the data and access in the memory block.

37) Explain the concept of Tree.

Tree is an abstract data type. It represents the nodes which are connected by edges.

A data warehouse is a business intelligence tool that stores data from operational databases as well as from external sources. It supports decision-making process in an organization.

We should use a data warehouse to ensure consistency of collected data. It also helps business leaders to develop data-driven strategies.

39) How many types of recursions are there in C?

41) Explain scope of a variable.

Scope means visibility of any variable. Visibility of variable is limited to program or function.

42) What is a user-defined exception in Java programming?

The keywords try, catch, and finally are used to implement a user define custom exception Java. In java, you can create an exception class and throw an exception using throw keyword.

In Java, a garbage collector is a program that manages memory automatically and removes unused objects.

It is a user-defined data type that is used to assign names to constants. It makes the program easy to read.

45) What do you mean by static identifier?

It is a process of converting text into code. The primary purpose of encryption is to prevent unauthorized access.

It is the transformation of encrypted data and converting it into meaningful text that you can read and understand.

48) What is a digital signature?

It is a technique used to validate the authenticity of the message. A digital signature is actually an encrypted version of the message digest.

49) Name the basic principles of OOPS.

Polymorphism is a concept used in Object-Oriented Programming. Polymorphism allows you to perform a single action in different ways.