Graphs are the third part of the process of data analysis. The first part is about data extraction, the second part deals with cleaning and manipulating the data. At last, the data scientist may need to communicate his results graphically.

This part of the tutorial focuses on how to make graphs/charts with R.

In this tutorial, you are going to use ggplot2 package. This package is built upon the consistent underlying of the book Grammar of graphics written by Wilkinson, 2005. ggplot2 is very flexible, incorporates many themes and plot specification at a high level of abstraction. With ggplot2, you can’t plot 3-dimensional graphics and create interactive graphics.

In ggplot2, a graph is composed of the following arguments:

You will learn how to control those arguments in the tutorial.

The basic syntax of ggplot2 is:

Let’s see how ggplot works with the mtcars dataset. You start by plotting a scatterplot of the mpg variable and drat variable. 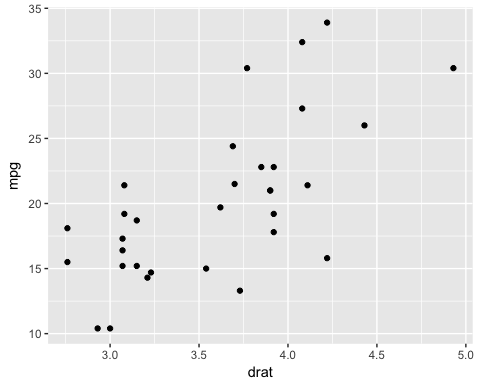 Sometimes, it can be interesting to distinguish the values by a group of data (i.e. factor level data). 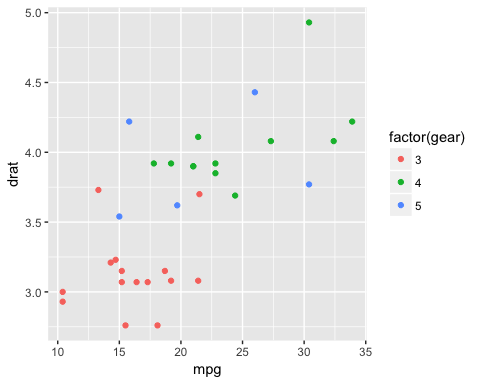 Rescale the data is a big part of the data scientist job. In rare occasion data comes in a nice bell shape. One solution to make your data less sensitive to outliers is to rescale them.

Note that any other transformation can be applied such as standardization or normalization. 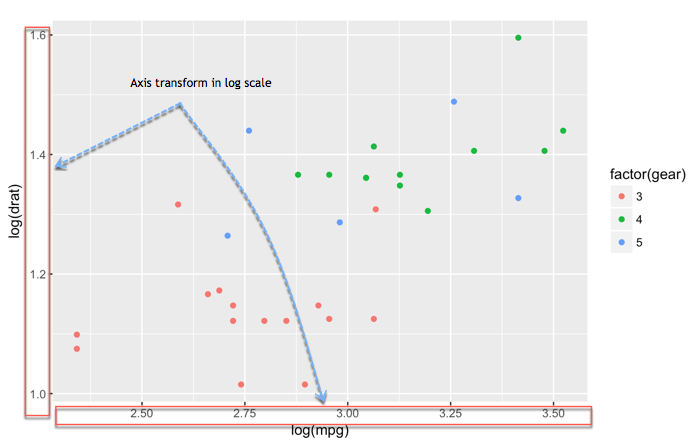 You can add another level of information to the graph. You can plot the fitted value of a linear regression. 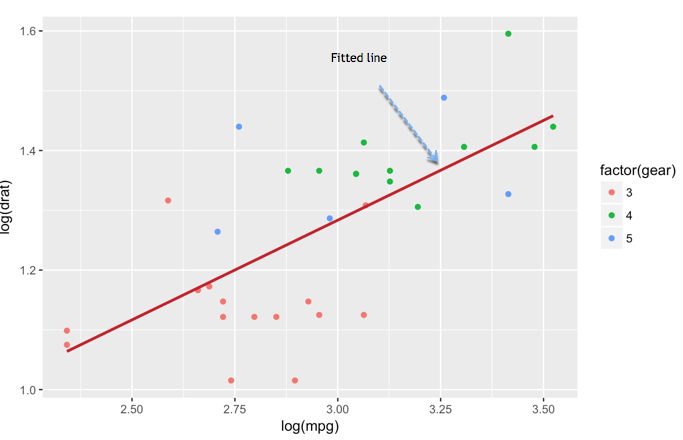 Note that other smoothing methods are available

Add information to the graph

So far, we haven’t added information in the graphs. Graphs need to be informative. The reader should see the story behind the data analysis just by looking at the graph without referring additional documentation. Hence, graphs need good labels. You can add labels with labs()function.

The basic syntax for lab() is :

One mandatory information to add is obviously a title. 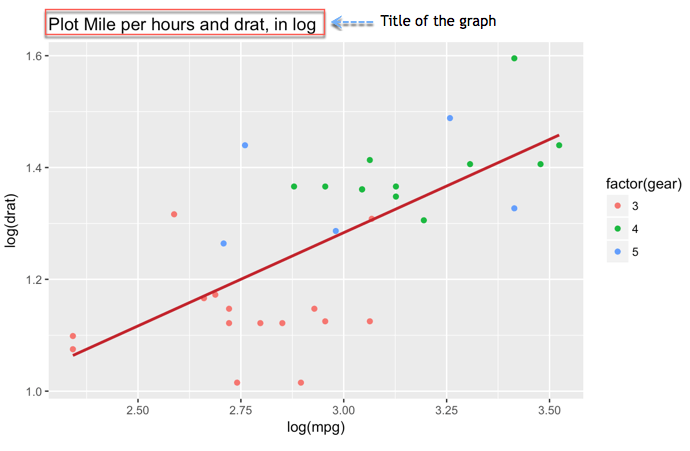 Add a title with a dynamic name

A dynamic title is helpful to add more precise information in the title.

You can use the paste() function to print static text and dynamic text. The basic syntax of paste() is:

You can add a dynamic name to our graph, namely the average of mpg. 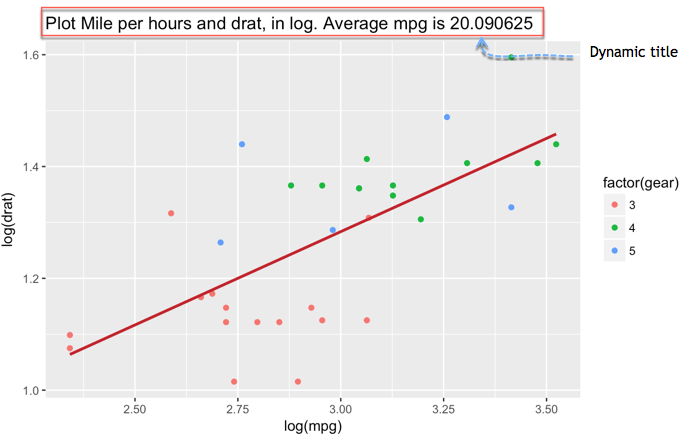 Two additional detail can make your graph more explicit. You are talking about the subtitle and the caption. The subtitle goes right below the title. The caption can inform about who did the computation and the source of the data. 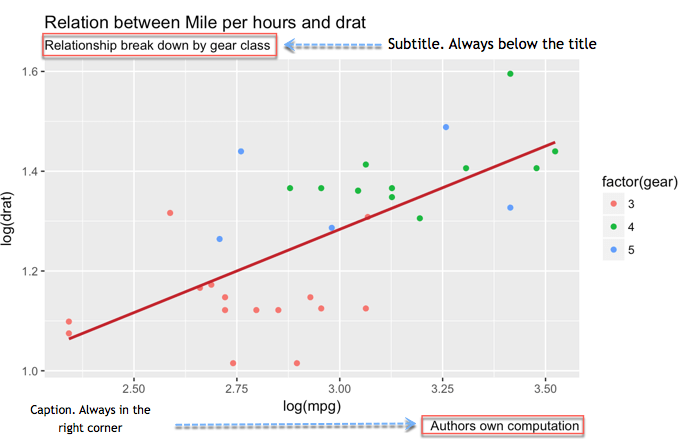 Variables itself in the dataset might not always be explicit or by convention use the _ when there are multiple words (i.e. GDP_CAP). You don’t want such name appear in your graph. It is important to change the name or add more details, like the units. 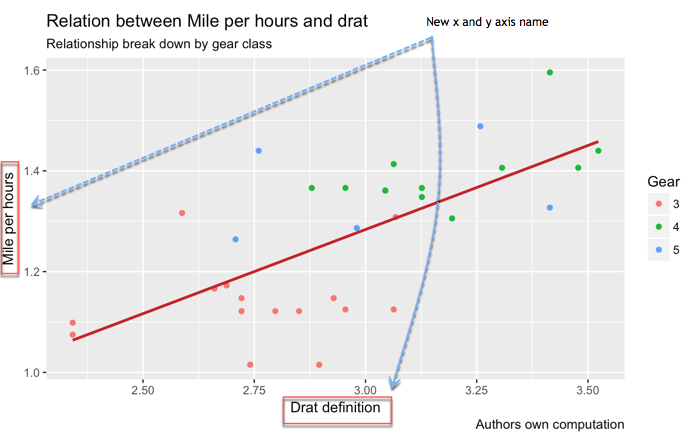 You can control the scale of the axis.

The function seq() is convenient when you need to create a sequence of number. The basic syntax is: 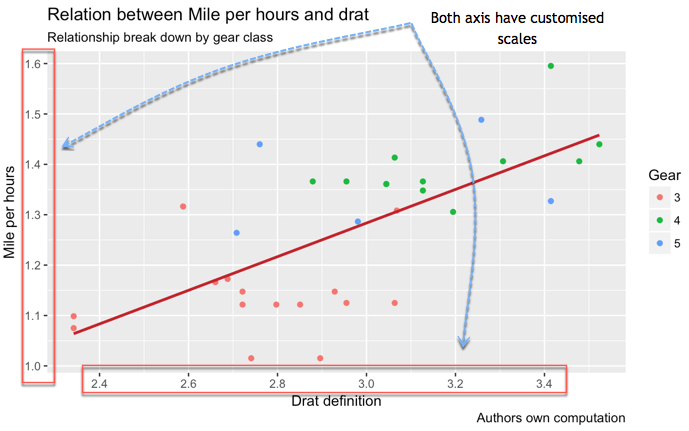 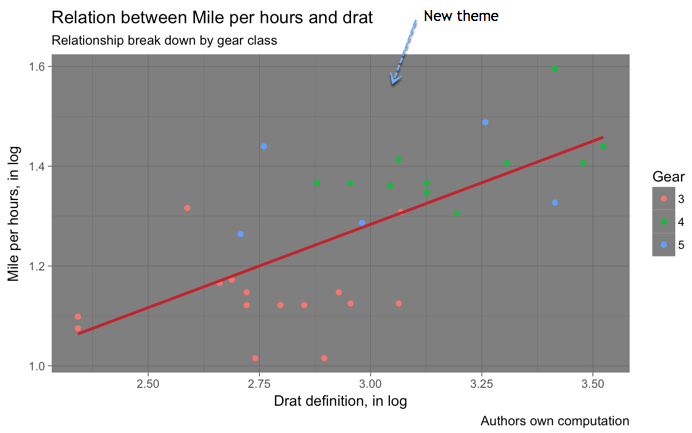 After all these steps, it is time to save and share your graph. You add ggsave(‘NAME OF THE FILE) right after you plot the graph and it will be stored on the hard drive.

Let’s plot your fantastic graph, saves it and check the location 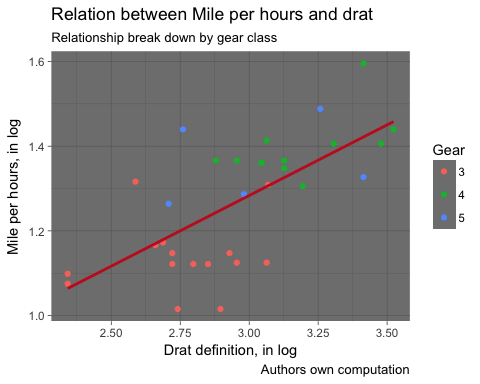 Note: For pedagogical purpose only, we created a function called open_folder() to open the directory folder for you. You just need to run the code below and see where the picture is stored. You should see a file names my_fantastic_plot.png.

You can summarize the arguments to create a scatter plot in the table below: