What is Pilot Testing?

Pilot Testing is defined as a type of Software Testing that verifies a component of the system or the entire system under a real-time operating condition. The purpose of the Pilot Test is to evaluate the feasibility, time, cost, risk, and performance of a research project.

This testing is done exactly between the UAT and Production.

In Pilot testing, a selected group of end users try the system under test and provide the feedback before the full deployment of the system.

In other words, it means to conduct a dress rehearsal for the usability test that follows.

Pilot Testing helps in early detection of bugs in the System. 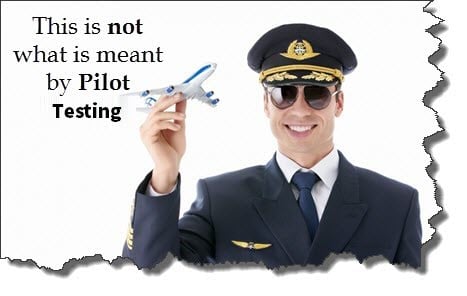 Pilot testing is concerned with installing a system on a customer site (or a user simulated environment) for testing against continuous and regular use.

The most common method of testing is to continuously test the system to find out its weak areas. These weaknesses are then sent back to the development team as bug reports, and these bugs are fixed in the next build of the system.

During this process sometimes acceptance testing is also included as part of Compatibility Testing. This occurs when a system is being developed to replace an old one.

In Software Engineering, Pilot Testing will answer the question like, whether the product or service has a potential market.

Why Pilot Testing is Important

Pilot Testing is Important because it helps in many ways like debugging software and procedure used for testing, checking product readiness for full-scale implementation, better decision on time and resources allocation, gives opportunity to gauge your target population’s reaction to program, measurement of success of program and gives team a chance to practice activities they will use for usability test.

How to do Pilot Testing

The level of Pilot testing depends on the size and scope of your migration project. The actual Pilot testing is done in a dedicated area or lab where users run numerous procedures, transactions, and reports as they simulate the software’s functionality.

Pilot testing can be conducted depending on the context of the project,

Step 2: Prepare for the Pilot test

Before conducting a Pilot Testing following things need to be considered,

During the Pilot test, the team gathers and evaluate test data. Based on these data, the team will choose one of the strategies.

Following are some common examples of Pilot Testing: