Any application can have multiple processes (instances). Each of this process can be assigned either as a single thread or multiple threads. We will see in this tutorial how to perform multiple tasks at the same time and also learn more about threads and synchronization between threads.

In this Multithreading tutorial in Java, we will learn:

What is Single Thread?

A single thread in Java is basically a lightweight and the smallest unit of processing. Java uses threads by using a “Thread Class”.

There are two types of thread – user thread and daemon thread (daemon threads are used when we want to clean the application and are used in the background).

When an application first begins, user thread is created. Post that, we can create many user threads and daemon threads.

What is Multithreading in Java?

Multithreading in Java is a process of executing two or more threads simultaneously to maximum utilization of CPU. Multithreaded applications execute two or more threads run concurrently. Hence, it is also known as Concurrency in Java. Each thread runs parallel to each other. Mulitple threads don’t allocate separate memory area, hence they save memory. Also, context switching between threads takes less time.

The Lifecycle of a thread:

There are various stages of life cycle of thread as shown in above diagram:


Some of the commonly used methods for threads are:

Example: In this multithreading program in Java example, we are going to create a thread and explore built-in methods available for threads.

When you execute the above code, you get the following output:

5 is the Thread priority, and Thread Running is the text which is the output of our code.

In multithreading, there is the asynchronous behavior of the programs. If one thread is writing some data and another thread which is reading data at the same time, might create inconsistency in the application.

When there is a need to access the shared resources by two or more threads, then synchronization approach is utilized.

In this way, the synchronization helps in a multithreaded application. One thread has to wait till other thread finishes its execution only then the other threads are allowed for execution.

It can be written in the following form:

In this multithreading Java example, we will take two threads and fetch the names of the thread.

When you execute the above code, you get the following output:

Thread names are being outputted here as

In this multithreading in Java example, we will learn about overriding methods run() and start() method of a runnable interface and create two threads of that class and run them accordingly.

Also, we are taking two classes,

When you execute the above code you get the following output: 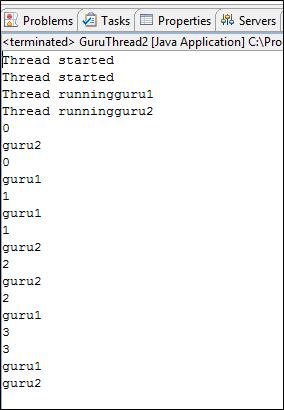 There are two threads hence, we get two times message “Thread started”.

We get the names of the thread as we have outputted them.

It goes into for loop where we are printing the counter and thread name and counter starts with 0.

The loop executes three times and in between the thread is slept for 1000 milliseconds.

In this tutorial, we saw multithreaded applications in Java and how to use single and multi thread in Java.