Continuous integration is a software development method where members of the team can integrate their work at least once in a day. In this method, every integration is checked by an automated build to search the error. The CI concept was first introduced over two decades ago to avoid “integration hell,” which happens when integration is put off till the end of a project.

What is Travis CI?

Travis CI was the first CI as a Service tool. It introduced a new approach to building code in the cloud. This CI tool allows the user to sign up, link their repository, build, as well as test their apps.

Travis CI tool can easily integrate with the common cloud repositories like GitHub and Bitbucket. It offers many automated CI options which cut out the need for a dedicated server as the Travis CI server is hosted in the cloud. This allows you to test in different environments, on various machines, running on different Operating Systems.

Travis CI is free for open source projects. For commercial projects, you need to purchase an enterprise plan.

Jenkins is an award-winning continuous integration tool that monitors executions of deployment cycles. It started as a side project by Sun’s software engineers group. Later it was expanded as one of the popular open source CI tools which help software development teams to automate their deployments.

Jenkins is a Java-based tool, which means you only need Java Runtime Environment to operate it. Hence, Jenkins can be installed on any operating system where Java runs.

In this tool, Developers can also specify conditions for customized builds. Jenkins supports a massive plugin archive. This allows developers to alter how Jenkin looks and operates.

Differences Between Travis CI vs Jenkins

Below is the main difference between Travis CI vs Jenkins:

What does Travis do?

What does Jenkin do?

Jenkins allows you to automate your build, test, and deploy tasks. The tool provides support for different OS like Windows, Mac OSX, and Linux systems.

Moreover, Jenkins gives you an ability to quickly build and test your code to get early feedback on whether it’s ready for production or not. In most cases, Jenkin will require few modifications according to your team’s custom requirements.

The number of questions labeled for Jenkins vs Travis CI in Stack Overflow: 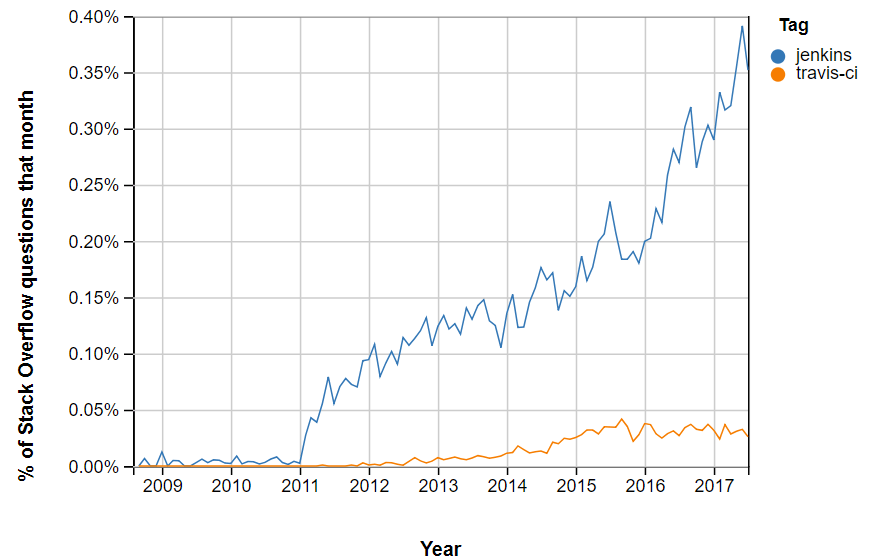 Thus, with the above discussion, we can say that Travis or Jenkins, both offer wonderful features. However, small open source projects are best suited for Travis CI as it is easy to run and quick to set up. On the other hand, large enterprise is best suited to Jenkins as it offers free licensing for a private project and a wide range of customizable feature. So, we can say that both Jenkins or Travis continuous integration tools are good in their way.