Blockchain is a shared database store continuously growing list of records, called blocks. Each block contains a hash of the previous block and a timestamp.

Here are three types of Blockchain :

Multiple organizations will have access and authority over the Network. It’s fully decentralized System

In this type of blockchain testing, everyone has access to the Network and can take part in Consensus. Its Decentralized System.

Only Single organizations will have access and authority over the Network. It’s a partially decentralized system. 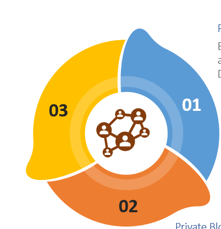 Main Components of a blockchain

The consensus algorithm is implemented as part of the node application, providing the ‘rules of the game’ for how the ecosystem will arrive at a single view of the ledger.

Abstraction of a machine operated with instructions and Implemented as part of the node application that every participant m the ecosystem runs.

How Does Blockchain Work?

Functional Testing plays an important role in Blockchain Testing as it helps in evaluating business requirements, processes, and effectiveness of use cases. Below are the components that can be tested as part of functional Testing: 1) Block Size and Chain Size 2) Adding a Block 3) Data Transmission

Blockchain application work in multiple environments. So, it is important to test inter-system connections

It helps in identifying hardware and software bottlenecks in advance. This can also help you figure out the potential costs of running the application in the cloud or other environments.

All diverse nodes on the Network must be tested independently to ensure smooth cooperation.

Application Programming Interface tests the interaction between applications in the blockchain ecosystem. API Testing ensures that requests and responses are formatted and operated properly.

It is an open-source testing library available on GitHub repo. It is easy to set up with manageable API support for various Testing requirements.

It is earlier known as Testrpc, is the widely used library for testing Ethereum contracts locally. It works by spinning up a kind of mock Blockchain that gives you access to accounts you can use for Testing.