BBC iPlayer has stream shows like Killing Eve and Peaky Blinders. But you cannot binge-watch them if you are not physically located in the UK or at least have a working UK IP address.

While any VPN can easily assign you a UK IP address, not every IP address will work on BBC iPlayer. Hence, most VPNs find it difficult to bypass the strict BBC geo-restrictions. That’s because the streaming service uses a very sophisticated VPN detection technology that constantly blacklists questionable IP addresses.

ExpressVPN users have the liberty to choose VPN security protocols depending on whether they want anonymization, speed, privacy, or a balance of both speed and privacy. Lightway is an excellent choice if you want a balance of privacy and speed. And if security is a top concern for you, OpenVPN is the way to go.

The only downside with ExpressVPN is its price, which is a bit above average for a VPN. However, this is compensated by the VPN’s sleek and premium features that give you value for your money.

In the likely event of a VPN dropout, ExpressVPN’s Network Lock ensures your IP does not leak.

How to use ExpressVPN for Free:

NordVPN’s is one of the most reliable VPNs for watching BBC iPlayer. It has invested heavily in great technologies and features that ensure tough BBC iPlayer algorithms do not detect your IP address.

All servers in the UK are optimized for streaming and have an extra layer of protection courtesy of a double-VPN feature.

NordVPN is also known for its impressive speeds, which run at about 249 Mbps. You will not have trouble streaming the latest UK TV shows and soap operas in 4K and crisp HD. It has s impenetrable 2048-bit encryption, which prevents exposure of your IP address and personal information.

The desktop app version can take a while to connect.
The torrenting feature is available only for a limited number of servers.

NordVPN is one of the few VPNs that unblock content from all streaming services.

How to use NordVPN for Free:

AtlasVPN is a relatively new provider in the VPN market. It began as a free VPN service provider and gradually offered premium plans to its users.

AtlasVPN servers are all optimized for streaming, and it automatically selects a suitable server for you while considering factors such as distance, latency, and download speed. If you are interested in BBC iPlayer content, AtlasVPN will pick a high-speed server in the UK, and another major perk of using AtlasVPN is the 24-hour support at your service.

It is very affordable.
It offers a simple and user-friendly interface that makes setting up fast and easy
It has solid security and privacy features, which include military-grade encryptions.
Fast speeds reaching hundreds of Mbps for different servers those in North America, Asia, and Europe

It has a limited server network.
Has no dedicated IP address that may make streaming more seamless

AtlasVPN’s has a host of security features like SafeSwap, a one-of-a-kind security feature that allows you to surf the internet with multiple IP addresses. This capability further reinforces your anonymity.

AtlasVPN leaves no room for unsecured data exchange. The VPN provider has a shielded connection and a data breach monitor that notifies you when your details are exposed online.

How to use Atlas VPN for Free:

Privacy is understandably a major deal-breaker to many streamers. If you’re one of them, SurfShark has got you covered with its OpenVPN encryption that secures your traffic as you stream. However, if you are only interested in a faster connection with less intensive security protocols, WireGuard protocol will serve you best as you stream the latest UK TV shows.

Still on privacy, one of the significant factors that come into play that VPN users might oversee is the VPN provider location. For a provider to ensure total anonymity, they have to be located in a jurisdiction beyond the reach of invasive jurisdictions. SurfShark is situated in the British Virgin Islands, the perfect location beyond aggressive jurisdictions’ reach.

It is very affordable compared to other VPNs
It has decent speeds for buffer-free streaming and 4K video quality.
Powerful privacy features that enhance security include an excellent protocol selection, strong encryption, and a multi-hop connection feature
Smooth streaming with no “proxy detected” messages.
Extra features that give you value for your money. SurfShark has extra features like Whitelister, No Border Mode, Camouflage Mode, and Cleanweb.

A weak social media presence compared to their counterparts,
A relatively smaller network compared to other VPNs
A bit complicated setup process

How to use Surfshark for Free:

CyberGhost is a reputable VPN. All UK servers are designed for streaming –no buffering, no video lags, just pure entertainment wherever you are in the world.

CyberGhost leaves no traces of its user online when it comes to privacy. The VPN provider boasts of top-level security and privacy and loves many security-conscious users. CyberGhost’s download and setup is easy as it takes less than 5 minutes to download, set up, and start streaming.

The truth is CyberGhost does not have supersonic speeds like NordVPN or ExpressVPN, but the speeds here are fast enough to stream a BBC iPlayer 4K video with no lags.

It has unique security features, including forced HTTPS, blocked online tracking, ad blocks, and virus protection.
Many UK locations to choose from for streaming BBC iPlayer App without trouble.
Has dedicated streaming servers that guarantee no lags and buffering.
It comes at a relatively lower price for those interested in long-term usage.

Not customizable enough for experienced users
Some servers can be slow, and this may affect the speeds

Besides having the standard security protocols–OpenVPN, WireGuard, and IKEv2, CyberGhost goes over and beyond by offering its users the No-Spy server for extra protection.

The No-Spy server is under lock and key at the company’s headquarters and is only accessible to a few staff.

CyberGhost’s base location in Romania undermines the Five Eye’s interest in accessing your information. This assures that your information is not shared with the UK government or anyone whatsoever.

How to use CyberGhost for Free:

Unblocking BBC iPlayer can be pretty challenging. The UK streaming service is highly harsh on VPNs with geo-blocks and firewalls that intuitively spot VPN use. IPVanish users are guaranteed a stable and reliable connection that is great for gaming.

Overall, there’s nothing to worry about with IPVanish. Both new and experienced users find the interface user-friendly and straightforward.

IPVanish is very tough on security with several security features, including 256-bit encryption.
It has supersonic speeds enough to stream an 8K video. The speeds sometimes go up to 500Mbps
It comes at a reasonably affordable price
The provider has good availability with plenty of servers across the world.

Not very good at customer support and takes longer for them to respond
Privacy issues. As a US company, the company is obligated to assist authorities in investigations.
Lacks optimized servers

IPVanish speeds are supersonic and enable you to stream BBC iPlayer with no buffering or slags.

How to use IPVanish for Free:

How we selected and tested these VPNs?

The following factors were considered for this list of powerful VPNs for BBC iPlayer;

Ability to stream: One of the most important criteria when selecting a good VPN for iPlayer is the ability to stream BBC iPlayer and other on-demand streaming services like Netflix, Hulu, and Amazon Prime.

Speed: We selected VPNs that can at least stream content in HD. We made speed-critical factor in our selection.

Security: We considered VPNs with a range of security features.

Value: All VPN providers are included, from the most costly – ExpressVPN to the most pocket-friendly – Surfshark and IPVanish. The issue here is not the fee, but the related services and features are worth the price.

How to Watch BBC iPlayer With a VPN?

With a VPN, you can watch restricted UK TV, including BBC iPlayer from around the world. Here’s how you do it;

Step 1) Sign up for one of the VPNs listed in this article and install it on your device. Then log in and choose a server with a location in the UK. 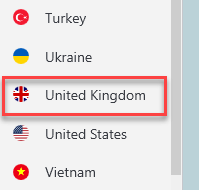 Step 2) Register with the BBC: Go to the BBC iPlayer website and create an account. While you need a UK IP address to watch the shows, you don’t necessarily have to be a UK citizen to sign up for a BBC iPlayer account. However, select the United Kingdom as your country. Step 3) Click “I have a TV license” on the popup dialogue that appears on your TV. While registering for the BBC, they will ask for a UK postcode. Enter any postcode you find on Google, and you’ll be fine provided you are connected to a UK server. ❓ Why would I need a VPN for BBC iPlayer?

BBC iPlayer is restricted only to those geographically in the UK. That means if you are outside the UK, even as a UK citizen, you cannot bypass the geo-restrictions to watch iPlayer content. And that’s where VPNs come in. VPNs help you hop on a server with a physical location in the UK to make watching possible.

⚡ Which are the best VPN for BBC iPlayer?

Here, are some of the best free VPN software for BBC iPlayer:

🚀 Is it Legal to Use a VPN to Watch BBC iPlayer?

It’s not illegal to use a VPN to access BBC iPlayer. Owning a UK TV license exempts you from streaming BBC iPlayer from whichever country you’re in.

The problem arises when you don’t have a UK TV license. VPNs help connect you with a UK server to assign you an IP address from the UK, thereby assuming you have a UK TV license. According to the BBC’s Terms of Use, it is prohibited to use a VPN from a country outside the UK. However, the worst you can get is a ban from BBC iPlayer, which you can still bypass using a VPN.

🏅 What Channels Can I Watch on BBC iPlayer?

Here are the list of channels you can watch with BBC iPlayer:

👉 How can I watch BBC iPlayer for free?

To watch the BBC iPlayer for free, you need the best BBC iPlyaer VPN. Download one of the VPN providers listed above and connect to a server within the UK, and you are good to go.

Yes. You can download BBC iPlayer shows using VPN to watch later, and it saves you on data usage and bandwidth.

But beware that the downloaded show expires simultaneously as their online versions.

❓ Why is my BBC iPlayer not working even with a VPN?

If your VPN is not unblocking BBC iPlayer, several things could be wrong.

Here are some prominent reasons behind it:

Your VPN does not have servers compatible with iPlayer. Check if your VPN works with iPlayer – because not every VPN works.

You might have chosen the wrong server. Switch to a different server in the UK.

Your BBC iPlayer server may be temporarily blocked, and it happens a lot. Then you can select another server or reach out to your provider.